The 'Rapunzel' Contest Winners Have Been Chosen 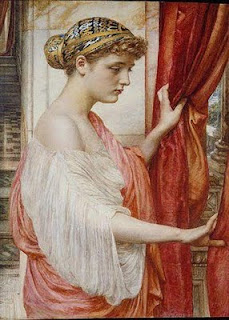 As usual, the process was brutally difficult. Truly, Enchanted Conversation owes so much to its readers and writers. Even when we don't choose a submission, we rarely come away unimpressed by the efforts people make.

Keep writing and keep reading. As for the latter, here are the winning entries; they appear below, in the next four posts. Enjoy!

This image, by Edward John Poynter, seems to reflect the longing Rapunzel must have felt being cooped up in the tower.
on April 27, 2011 No comments: Links to this post

The Prince and the Sky-Maiden, By James Hutchings

Once upon a time, long ago, there was a crone named Dokka. Dokka was the cleverest crone that ever there was. If a women who was barren went to her, why by the time Dokka got through with her that woman would lie with her husband in the night and have ten strong babies by morning. A pregnant woman could go to her, and just by looking Dokka could say if her baby was going to be healthy or sick. If there was a thing she couldn't do, I'm sure I've never heard of it.

But Dokka was so clever that she saw a great danger coming, which no one else could see -- or if they could see, they certainly didn't know what to do about it. It was a great evil, with no shape and no sound, and if it had a name only Dokka knew it. It had more power than anyone, even Dokka herself. It wanted only to kill every man, woman and child on the earth, and those it did not kill it wanted to turn into monsters.

At last Dokka told her granddaughter, whose name was Gloria, to come to her house. She cast a spell on Gloria, so that every time she awoke she would be awake a day, yet every time she went to sleep she would sleep for a hundred years. Then she put Gloria in a tower in the middle of a great forest, as high as the sky, and bid her sleep. Then she set soldiers to guard the tower, who never died. She said to these guards that they must not let anyone in the tower, other than a true-born man. Last of all she set a talking stone at the base of the tower, which would tell anyone what lay within.  Last of all, Dokka herself drank poison, so that the great evil could not turn her into a monster.

Now the evil came to the earth, and worked its will. Everyone it could kill it killed, and those it did not kill it turned into monsters. But Gloria slept in her high tower, and she never knew the evil had come, and it never saw her. At last there was no-one on the earth, other than monsters, and the evil went away. For years and years there were only monsters, until at last some true-born men and women came out of the ground. But Gloria slept on, only waking up for one day every hundred years, and the stone warned the monsters not to enter. And those who didn't listen? Well, you may be sure that the guards chopped them up.

One day, many centuries later, a prince was riding through the forest. And what do you think - he came to the tower, and the talking stone.

"Now stone, tell me what lies within this tower?" said the prince.

"Now prince, Gloria lies within. She is more beautiful than any maiden you have seen, and her hair is as golden as the sun," said the talking stone.

"But what do you mean, 'as golden as the sun'?" the prince replied.

"Well now prince, many centuries ago the sun was gold. And that is why these times were called the Golden Age," the stone said.

The prince was greatly taken with the idea of a golden sun, and of a beautiful maiden with hair the same color. So he asked the stone if he could go inside. But the stone told him, "Only a true-born man may go within."

"Again, what do you mean?" the prince cried angrily. "I am indeed a true-born man, and a prince at that!" But the stone was silent.

Now the prince was as angry as if he'd sat on a hundred thistles. But he was no fool, this prince, and he knew that anyone who could build a tower that high and set a talking stone at the bottom, that wasn't someone you could just beat by running at them with your sword. So the prince sat at the base of the tower, deep in thought. Now by chance, Gloria had woken up from her hundred-year sleep that very morning. She was looking out of her tower, down at the clouds, and feeling pretty lonely up there all by herself. Just then she heard the prince, talking to himself about one plan and another to get into the tower.

"Oh, who is down there?" Gloria shouted down.

"A prince of this land," said the prince.

"Well now I would," said the prince, "but this stone down here tells me I can't come in, for not being a true-born man."

"I know!" said Gloria. "Why don't I send down a lock of my hair? You show that to the guards, and they'll think you're a true-born man."

The prince thought this was a fine idea. So Gloria cut off some of her hair, and threw it down, through the clouds, and down to the prince. And the prince saw this hair, which was like gold, and he thought that if her hair was this beautiful then Gloria herself must be the most beautiful woman in the world.

So the prince went into the tower, and he saw the never-dying guards. But he just held up a fistful of Gloria's hair, and they let him go right on through. Up, up and up went the prince, higher than the birds, higher than the clouds, high as the sun almost. And at last he came to Gloria's room. He opened the door, and when he saw her...

Oh! She was so ugly. Both her middle limbs were missing. There was no hair on her body at all - and yet hair covered her head! The prince realised where the lock of hair he held had come from. He was so disgusted he couldn't even breathe. 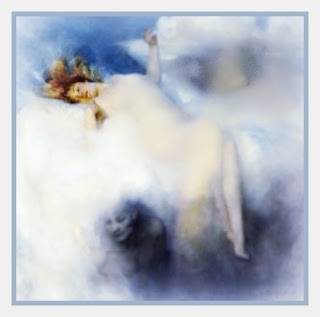 "Don't you come near me!" he said, and he was so sick he didn't want to live any more. He jumped right out of the tower! Down he went, down past the clouds and the birds, and at last he landed in a thorn-bush, and that bush scratched out his eyes, and he was blind.

Now Gloria was scared that the only person she'd ever seen would die. So she ran all the way down the stairs, and there he saw the prince, all bloody and blind.

"Oh woe is me! No one's going to want me with no eyes! I won't even be able to find food for myself!" the prince said.

But Gloria said, "Well now, you were damn rude to me prince. But I guess I don't want you die." So Gloria gathered berries and mushrooms for the prince to eat.

The prince stayed with Gloria. And since he couldn't see her, it didn't matter that she was so ugly. And as for Gloria, she'd never seen anyone else. So after a while they got married, and they had children. And that's where we all come from; you and I, and everyone else, and all the true-born men and women that ever have been and ever will be. So I guess that shows that Dokka was the cleverest crone that ever there was, and that even great evils will be beaten in the end.

James Hutchings lives in Melbourne, Australia. His work has appeared in Daily Science Fiction and fiction365 among other markets. His blog, http://teleleli.blogspot.com, is updated daily.

The image, which has been altered to fit better with the story, is by Arthur Hacker, and was painted in 1902.
on April 27, 2011 3 comments: Links to this post 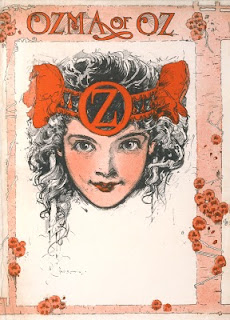 No, we haven't forgotten EC, the contest, opportunities for guest blogging or anything else. It's just end of semester time. Give us a couple of weeks. We have good things in store.

Those who have not received replies to emails -- please hold on. We will get back to you.\

Meanwhile, here is a pretty picture of Ozma of Oz, my only hero in childhood.
on April 14, 2011 1 comment: Links to this post