Hitting the Wall by A.M. Offenwanger

What nobody had told me was that
the folklore about frogs is different... 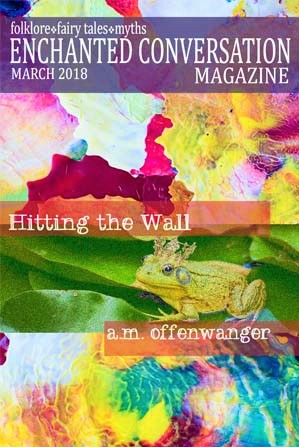 EDITOR'S NOTE: Just a reminder that submissions for the April "Animal-Themed" issue will close on March 20th. Read all the details HERE. Until the new issue comes out, please enjoy A.M. Offenwanger's "animal-tale" of a frog and many princesses called, "Hitting the Wall."


“Become a frog,” they said. “You’ll have pretty girls lining up to kiss you. Sure way to get that girlfriend.”
So I hoofed it over to the nearest witch. It only took a little bit of taunting about gingerbread and little kids for her to lose her temper and zap me. Whoosh, there I was, developing a taste for entomology (house flies, I learned, are a good staple food; mosquitoes work well for a snack—they leave a nice metallic buzz on the tongue).

But what nobody had told me was that the folklore about frogs is different in Europe. Girls read fairy tales from books there, and the way the old Grimms tell the story isn’t what I’d always heard.
It was a nasty surprise.

She was a beauty all right, that first girl—flashing black eyes, dark curls, a figure to die for… She took me to her bedroom, and I sat on her hand, puckering up in anticipation. Then—Splat! I hit the wall. I’m not sure what was worse, the pain or the shock.

“Oh well,” the girl said, “you’re obviously not the right one for me,” and she tossed me through the open window into the garden.

I sat stunned for a moment, then absentmindedly shot a black fly out of the air to console myself. Trust my luck to get a psychopath on the first go, but there were always other ones.

The next girl looked sweet—ethereal and blonde, classic princess material. I sure got my hopes up, until—Splat! “Oh damn!” said the sweet princess, and she left me lying injured on the sidewalk. I hid in the bushes for a few days until my sprained foot recovered.

After that, they became a blur—blonde, black, redhead, dark-skinned, pale, tall, short... I was punch-drunk from all the walls I’d been thrown at, and I developed a neurotic twitch at the sound of high heels clicking towards me on the pavement.

So when, after weeks of this, one more pair of female hands cupped around me and raised me up, I just closed my eyes and waited for it to be over.

“Look at you!” she said. “Aren’t you a cutie! You’re a Pacific tree frog, right? I’ve never seen one of your kind before!” At the gentle sound of her voice my eyes popped open. A pair of soft brown eyes looked at me out of a freckled face.

“Oh!” she cried, delighted. “You even have an accent! Our frogs here just croak, ‘scraaak’. I almost don’t want to try—you’re so cute as a frog. Are you a prince?”

I almost shook my head, but something stopped me. I blinked my froggy eyes at her.

“Okay,” she said, “I think the safest is if you do it yourself.” She raised me up until I was within a few inches of the moss-covered brick wall that I had been thrown at at least twice before. “Go ahead,” she said softly, “jump at it, little Frosch.” She ran a gentle finger over my back. “Don’t hurt yourself.”

That’s what did it. None of the other girls cared one bit about me as a frog; all they wanted was the prince. This one—was different.

I gathered my legs under me and leapt.

And then I was on my back on the hard sidewalk, staring up into the tree branches hanging over the top of the wall, which looked much smaller now. A freckled face came into view, its eyes wide.

She bent down and kissed me.

And that kiss was worth every single second of being a frog.