Royal Ball? Get Home Before Midnight or Magic Happens, By John Patrick Pazdziora 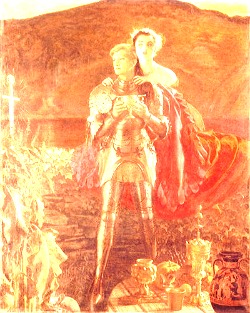 Editor's Note: John Patrick Pazdziora (PGDip, Belfast Bible College) is a freelance writer and a doctoral candidate at the University of St Andrews, studying children's literature and fairy tale. He occasionally lives online at The Paradoxes of Mr. Pond, but usually lives in Scotland, with his wife and daughter.
I like to think I enjoy these falderal and frippery affairs as much as the next chap, but I’m dashed if I ever throw a Royal Ball again! I mean to say, well, dash it, I say! Can’t a fellow keep his own head together, what?


Sorry to seem flustered, you know, but it was the most extraordinary thing. The king my father, and the queen my mother as well, they told me this was the sort of thing that might happen. I suppose I ought to have listened but they didn’t come right out and say it. I mean, they didn’t say, 'Percy, my royal boy, you’ll only get yourself in a dash of bother!'


What they did say wasn’t too helpful. I went to the king, you know, with this spiffy idea for a Royal Ball. ‘I say, old bean,’ I said. ‘Royal Ball, eh what?’

‘Royal Ball,’ said my father. ‘Like the time your mother and I roasted your dear grandmother alive, you mean?’


‘Not like that really,’ I said. ‘Nothing half so old-fashioned. I mean a gala to-do with lights and paper lanterns and punch and paper lanterns and lights, you know. And the band can play toodle oodle and rumpty pom, and I can jolly well dance all night and still dance some more, with half the gals of the kingdom. If music be the food of love, well, might as well have a jolly lot of the toodle oodles, what?”


My father was writing death warrants in the Green Room. He set down his black pen and stared at me in that way he has, over his glasses, like he’s measuring you for a coffin, trying to see if he can cram you all in at one go or needs to chop you up a bit.


After I ran round the castle I went to see the queen my mother. She was in the Mirror Room, eating chocolates and listening to the troubadour sing ‘The Ballad of Her Passionate Heart’, I think it was.


‘I say, mum,’ I said. ‘Music being the food of love, I think we should cry haldo and let slip the dogs of it, what? Toodle oodle and rompedy pum and all that, you know.’


The thing about the Mirror Room is that you’re always looking over your own shoulder. And what isn’t looking over your shoulder is either a violently fluffy cushion or a small, cruel dog inclined to bite. It’s hard to tell which is which, at first.


Mother popped a chocolate in her mouth and giggled. ‘Percy! You’re not in love, are you?’


‘Yes, but it’s the wrong weather for quests.’


Mother sighed, and looked at her looking at her at me at her. ‘You really are very silly, Percy. You know what your father will say when he hears about this? More cold showers, my boy, harrumph! That’s what he’ll say. Three times round the castle!’


‘You ought to go on a quest,’ said my mother, smiling from every corner of the room at once. ‘Magic’s more manageable on a quest. You try to bring it in here and heaven knows what will happen! Bell tolls one and poof! You turn into a pumpkin!’


Well. They said all that, and I may have had to run around the castle a few times more, but the thing is when you’re an only prince they can’t just go lopping off your head if they don’t like you. It’s a dynasty thing. So I said, why not have a ball, and I said it until they said, oh anything to make him shut up, and so that’s what happened.


It was a simply spiffy affair. We had the whole Great Hall decked out in paper lanterns. And crepe, or taupe, or that crinkly papery stuff, over the tapestries of Great Uncle Rupert dismembering those Scots wha hae wi’ Wallace died pretty awfully. We put the band up in the balcony, and they played rumpty pom and toodle oodle, and there really were a lot of paper lanterns.


I wore this gold thing, you know, with silk round the collars, since it matched my hair and looked smart. Had a time of it, too, walking around and looking at all the ladies looking at me. I danced with one girl for a toodle, and another for an oodle, and then sat out for the rompty poms since I was getting pretty bored by then.


That’s when she came in.


Enchanting creature in a blue gown that made me knock the Prosecco into the punch. Simply spiffy girl, walking in beauty like the night of cloudless climes and an awful lot of stars and sequins.


‘The Princess Nobody from Nowhere!’ shouted the herald.


‘Gosh awfully,’ I said. ‘I mean to say. Er.’ That didn’t sound quite right, hardly the stuff of thoughts supremely sweet expressing how topping their dwelling place was, especially by comparison. So I tried again. ‘I say, I mean. Aren’t you a super girl!’


We danced. Did I mention she had marmalade coloured hair? Like some really amazing cat. And very green eyes. The band played toodle pom and romptey oodle, and I even got a chance to tell her that marvellous story about old Biffy and the man from Harrogate before she said she had to go.


‘I’m so sorry,’ said Princess Nobody, ‘but I must go soon.’ She smiled, and she could have sent me running through seven miles of steel thistles with that smile. ‘I don’t want to turn into a pumpkin, you know?’


‘Hang on, that’s me,’ I said, following her out the hall and down the stairs. ‘I’m supposed to turn into a pumpkin if there’s some magic gone wrong, right? I say—I say, do you think we could meet up for tea? I mean, dash it I say!’


She got into the coach and swirled away, and there I was holding her programme and not knowing a thing about this marvellous girl.


I moped for a week before father gave in.


‘In my day we didn’t shilly-shally about,’ he barked. ‘Went out questin’. Found a fellbeast and gave it a good whack, took his dinner of maiden for ourselves. That’s the ticket, young pup me lad!’ He tucked his hands under his coattails the way he does, gave me that look and puffed through his whiskers. ‘You see this mysterious damozel at this hullaballoo tonight,’ he said, ‘you tell her to set you a quest. Tear some fool in half, or burn an old witch, or roll a judge down a hill covered in sharp stones in a barrel full of nails and poisonous snakes into a pool of boiling lead. Something sensible and princely like that.’


The band wasn’t quite as good that night. They oodled when they should have pommed and toodled when a rumptedy would have done, but I didn’t mind that a bit when that spiffy Princess Nobody breezed through the door. I’d been trying to think of a quest, and I’d thought up a pretty good one, but it went clean out of my head when she came in and smiled at me, her silver dress out-braving all the pride of the fields sort of thing.


‘Look here,’ I said, as we swirled round as best we could to the romptey oodle and the toodle pom. ‘How about a quest?’


‘Well, dash it, you know,’ I said. ‘Quests. Dragons, giants, old men in barrels of snakes, what. Should we have one?’


The clock struck quarter to twelve and she disentangled herself with another smile. I would have run up a mountain of glass for that smile. ‘I must be away,’ she said, ‘or there’ll be one too many pumpkins in the world.’


‘I’ll find a pumpkin for you,’ I said. ‘We’ll hire pumpkin eaters to entertain you at court. I’ll got on a quest to find the biggest, orangiest, superest pumpkin you could—Princess Nobody! What’s your name where do you live can I call you sometime—?’


Away goes the carriage again. I sat on the steps and didn’t say another word for anybody.


Two weeks this time and mother finds me sulking in the Royal Botanical Gardens.


‘I’ve got it all figured out, Percy dah-ling,’ she says. ‘Oh, it’s just the sort of thing that happened in the “Lay of His Mysterious Madame”! She’s not really a princess at all! I’ll bet she’s just one of these horrid common girls with a fairy godmother! And if she stays till midnight her carriage turns back into a pumpkin and her dress turns into rags and tatters and the horrible truth comes out at last and she bursts into tears and swoons fainting onto your noble bosom and when she wakes up you—Percy? What are you doing?’


‘Yes dear,’ said my mother. ‘So what you do is, keep her at the palace until the clock strikes twelve, and then what’s pumpkins is pumpkins, what’s rags is rags, and what’s a beautiful girl really will still be a beautiful girl then, and then you—what are you sketching, dear?’


‘A gladiola,’ I said. ‘There are forty-seven different varieties of gladioli in the habitable hemispheres, and I think I’ll start a collection.’


She had me there. I packed up my sketchbook and crept out of the Gardens. It wouldn’t have been much of a quest, anyway.


The next night we did away with paper lanterns and put up chandeliers. The band played tirra tirra tum de dum something dum da te deedle tum thingy—you know the one I mean. And in swept the Princess Nobody from Nowhere in a dress of pure spun gold, and a radiant smile, as if all the world and love were young and hadn’t a thing to bother about.


‘I say, see here,’ I said, as we whirled around to the tooraloo, ‘I’m not, you know, class conscious sort of thing. So it doesn’t really matter, you know. About us.’


‘Really, I don’t know what you’re talking about,’ said the Princess, smiling a smile that would have made me sing songs in hell for her, despite avalanche or roadblock. ‘Now I really must go or I shall turn into a pumpkin.’


‘Stop a bit!’ I said. ‘I mean, dash it. It’s a deuced thing, but I can’t remember your name. I mean—look here!’ I shoved my sketchbook at her. She hesitated, took it. ‘There are forty-seven kinds of gladioli, you know. We could collect them together, what?’


The clock struck twelve. The band blared toodely pow. I caught the princess in my arms and—


And I’m dashed if she didn’t turn into a pumpkin!