Father of the American Fairy Tale by E.J. Hagadorn 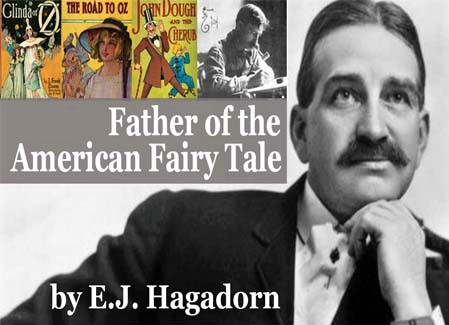 In recent years, visiting the graves of famous authors has become my favorite pastime. One particular grave that I think fairy tale lovers would most appreciate is that of L. Frank Baum, author of The Wonderful Wizard of Oz, and all its relevant literature.

When it comes to fairy tales, readers agree that Baum was to the United States what the Brothers Grimm were to Germany and what Charles Perrault was to France. Baum was a reader of European fairy tales, and when he chose to pen his own, he approached the task hoping to appeal specifically to American children. The result was an unforgettable mythos of magical characters, idealistic fantasy, and all-around fun.

The following is an account of my pilgrimage to Baum’s grave, as documented on my website authorgraves.com.
L. Frank Baum
(May 15th 1856 - May 6th 1919)
Brief Bio:
Lyman Frank Baum was born in New York, the seventh of nine children. As a boy he was attracted to writing and created several amateur publications. He had a flair for the theatrical in both his professional and home lives.  As an adult, he tried his hand at numerous professions, including acting, shop keeping, and journalism, with wavering success. In 1897 he began writing novels for children. The Wonderful Wizard of Oz, published in 1900, became an immediate and lasting success, which created a new cultural zeitgeist in American folklore, and came to dominate Baum's career for the rest of his life; he wrote numerous sequels, short stories, and stage adaptations about the Land of Oz. The financial failures of his other ventures proved to be a problem for his health, and in 1919, Baum suffered a stroke and slipped into a brief coma before dying in Hollywood.
Notable Works:
The Grave:

Baum is buried in Forest Lawn Memorial Park in Glendale, CA. His grave is in Section G, as indicated on the maps available at the front entrance. He is right next to the road in the shade of a large tree, surrounded by his family. 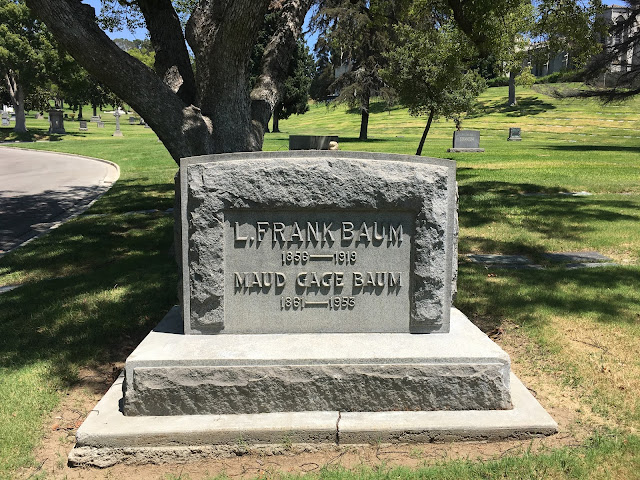 Surrounding Area:
Forest Lawn Memorial Park is mostly surrounded by residences, so there's very little to do outside the cemetery. However, because Forest Lawn is so large and beautiful, one can easily spend an entire day exploring it. It contains a church, a museum, and dozens of freestanding sculptures. Though many famous people are buried here, such as Clark Gable, Walt Disney and Michael Jackson, many of their graves can only be visited by family members. Others are open to the public, but carefully protected by security.

Baum’s contribution to the world of fairy tales was monumental, but what’s truly remarkable is that the stories didn’t die with him. Dozens more Oz stories have been told since his passing, fueled by the childlike wonder and the love of thousands of readers and writers and artists. The Land of Oz and its inhabitants hold a special place in people’s hearts, just as they did when Baum was alive. At the end of the day, that’s all any writer wants, and I think Baum would be pleased to see how far his influence has reached.

If it’s within your reach to visit L. Frank Baum, I highly recommend you do. There’s no better way to reassure Baum that he, like his works, will never be forgotten.

E.J. Hagadorn is an independent author of fiction and poetry, whose works include "Sing A Song Of Yellowstone" and the award-winning "Spring-Heel'd Jack."  When not writing, he can occasionally be seen traversing mountains, lurking in graveyards, or sleeping at his desk.

Read E.J.'s poem, "All That Glitters," from EC's Diamonds and Toads Issue HERE.