A Struggle in Definitions by William Gilmer 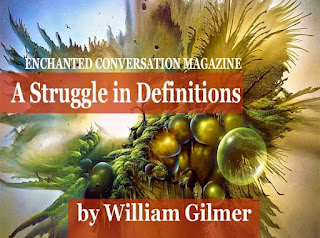 Editor's Note: William and I worked together as submissions readers for the science fiction/fantasy magazine, Empyreome, (and also had work published in the same online and print publications,) so I'm excited that he is bringing his talents to the EC Team. Check out his first article for EC below and say "hello" to him in the Comments section.
-Amanda Bergloff

Let’s face it, words are hard. Trying to pick exactly the right one can be frustrating as you attempt to find a dividing line between similar definitions. I’m fairly sure Webster’s has muted me on Twitter for my repeated questioning about how thaw, unthaw, and dethaw can all mean the same thing.

This list was born the day I tried to find a simple description of what constitutes a fairy
tale. It turns out that this question leads you into a rabbit hole of entomology that is hard to
escape from unscathed. The explanations I’ve attached to these terms are meant to be
guideposts rather than set in stone rules. Truly, entire research papers could be written on the meaning and origins of these terms. In these cases, exceptions may prove the rule.

Folklore is the big umbrella term used for every subdivision that is going to be listed below. Folklore encompasses everything that describes a culture, not only its stories, but its customs as well. Jokes, rituals, tradition, what you say after a person sneezes, all fall under the huge heading of folklore. Folklore is the culture of a region or people taught through oral tradition and individual example.

A fairy tale is a short story, traditionally taking place in a medieval or feudal setting, with fantasy elements of anthroporphized animals, exotic humanoid species, and magic. It is difficult to sum up all the different ideas about what a fairy tale is in a single sentence. There are traits that are present in huge swaths of fairy tales that are absent in others. Generally, fairy tales are meant to entertain, rather than teach a lesson. The vast majority showcase happy endings and the power of Good over Evil. Fairy tales have their roots in oral tradition, so books like, The Wizard of Oz and Alice in Wonderland, are simply too long and the wrong medium to be considered fairy tales.

There is a small exception to be made for Peter Pan. Along with the oral tradition, fairy tales were also acted out in performances as a form of community storytelling. Peter Pan first appeared in J. M. Barrie's, The Little White Bird. Shortly afterward, the story that we are more familiar with today, appeared in a play by Barrie entitled, Peter Pan; or, the Boy Who Wouldn't Grow Up. In the tradition of these group performances, there is a case to be made that plays are similar creative demonstrations, possibly qualifying Peter Pan as a fairy tale.

Luckily, everything else on this list is a bit easier to define than "fairy tale." A fable is a story written in prose verse that ends with a moral teaching. Fables must anthropomorphize non-human characters. There isn't much stipulation on what can be used. There have been fables written utilizing the wind, plants, household objects and nearly every animal on the planet.

Solid examples would be, "The Tortoise and the Hare," by Aesop and Animal Farm, by Orwell. As a side note, if you were to write a fable without all the anthropomorphizing, what you would have is a parable.

Generally, fairy tales and myths are not meant to be believed. One of the hallmarks of legends is that they have a basis in fact. They deal with and offer accounts of real people, places, battles, etc. Because of the authenticity they seek to project, they only contain one specific brand of fantastical elements; those having to deal with faith. Miracles and divine intervention find a home in legends because, presumably, the cultures they originated from believed such acts to be possible. Unlike other folk tales, the legend should be thought of as more improbable than impossible, an exaggeration of true events.
The Arthurian Legends are interesting in this regard because they seem to have evolved from true legends to myths. The original accounts of King Arthur didn't contain the wizard, Merlin, or Excalibur, and marked Arthur's greatest feat as slaying over 900 men at the Battle of Badon sometime in the 5th century. Over hundreds of years, many fantastical details, subplots, and characters have been added to the story, making it read more like high fantasy than proper legend.
Examples of legends can be found in the stories of early Christian saints and in the accounts of Robin Hood.

Myths and legends share a lot of common ground. Both tell stories using real world people, places, or events. Many times, myths seek to explain a phenomenon in nature (e.g. thunder, echoes, how the Grand Canyon was formed.) The main defining difference is the degree of fantasy employed. Where legends are required to stay within acceptable possibility, myths can throw convention aside and get as outlandish as they want.
Well-known examples of myths are the stories of Hercules, Beowulf, and the more modern Paul Bunyan.

Another branch of folklore that is interesting to examine is the nursery rhyme. A nursery rhyme is a song or poem intended for young children. While there are nursery rhymes out there that have educational value ("I'm a Little Teapot" was used to help children learn to dance and "Old McDonald had a Farm" teaches animal noises,) many are silly and focus on engaging the imagination, such as "The Cat and the Fiddle," and "Rub-a-dub-dub." Nursery rhymes that are meant to calm a child down so they can sleep are referred to as lullabies.

So there you have it...
a list of flavors being served at the ice cream parlor of folklore. This is certainly not exhaustive. There are many other terms that could use some clarifying, but these seem to be the most befuddling of the lot. Always remember, these words are used pretty interchangeably in modern conversation, and even the real experts disagree on exact definitions.

Will Gilmer is a writer and poet currently living in Michigan where Fall doesn't last long enough. Two dozen of his stories have been published in places like Empyreome, the Sunlight Press, and Ellipsis.
Follow him on Twitter @willwritething
on January 13, 2018