She approached him not with fear,
but with innocent boldness... 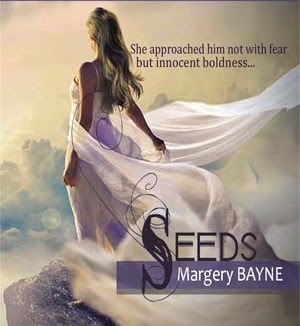 Persephone snuck past the Ferryman and sat on the riverbank outside the diamond gates. She waited like bait for Hades to come. He came.

“At first I thought some clever mortal had snuck so close to my gates, but none would choose to lounge, here” he said when he appeared beside her.

She looked up at him, then stood. She barely blinked.

“Yes,” he said like maybe he knew this. “What’re you doing here?”

“I’ve never seen the Underworld. I wanted to.”

This odd request paused him.

“What interest could you have in it?”

“For all the gods of Olympus, their worshippers live then die. To your kingdom they come and stay forever. It’s always growing, always bigger.” Flattery worked best when genuine.

Here, Persephone knew she was on her way to winning. She had read him correctly. She approached him not with fear, but innocent boldness which must be, to him, refreshing as water.

Once in her many years, Persephone had seen Hades upon Olympus. Mother always kept Persephone gilded to her side when in the company of other gods. Hermes and Apollo had expressed interest in Persephone’s hand before, but Demeter was a jealous mother and thus a protective one. When one had a protective mother, others assumed that one was weak. And mother’s always believed their children lesser than themselves.

Persephone hadn’t spoken to Hades then, and he hadn’t spoken to anyone who didn’t approach him first. He was dark-robed and tall with a sallowness to his skin and a straight, long nose. He was neither handsome nor repulsive. What impressed her, watching him, was how anyone who passed him by did so with careful step and space. That was respect. Persephone was awed.


That memory was a seed. Persephone was an expert in cultivating seeds into strong, thriving, fruitful plants.

They walked along the bank, through the gates, past the far side of Cerebus, the way the souls came. “He lets no one leave the Underworld but me,” Hades said of the three-headed beast. “Don’t worry. I’ll escort you out.”
“What would you like to see?” he asked. “Elysium Fields? Isle of the Blessed?”
“All of it,” she said, as kept herself a half-pace behind him as he tried to slow his stride to match hers.

Persephone, stewardess of flowers and olive trees, was a lesser goddess. Mortals worshipped her because she brought green life, instead fearing her for shipwrecking storms, thunderbolts, or bloody battle. They didn’t think about the long death of barren dirt.

She thought about it -- about starvation and about the fleeting lives of mortals and their faster fleeting loyalties.

“Are they all so lifeless?” she asked as a spirit of a man, once a farmer, dragged by with a heavy slowness, skin sun-beaten as the day he died.

“Do they do nothing… want nothing?”

“In a way they’re stuck,” Hades explained. “Being the same in death as they were in life. And most mortals have un-extraordinary lives.”

“How awful,” she said. She blinked slowly. “There’s more to see.”

At the gulf that dropped down to the prison of Tartarus, the roar of the trapped titans and the betrayed Kronos could be heard, pure rage unhampered by time except perhaps in its degree of madness. Persephone peaked over the edge and quickly stutter-stepped back, right into Hades’ chest. He planted steadying hands on her shoulders.

Hades led her to accommodations in the corner of the Underworld he had carved out for his own comfort. No host would deny a welcome traveler their rest, Persephone had wagered.

That eve, Persephone slinked out of her room to his. Bare-skinned, she climbed into his bed and pressed her body along his.

He spoke, voice even, “What’re you doing?”

She rolled away at the rejection, face hidden against her arms.

“You must think I’m a silly child.”

He was quiet for a growing moment as Persephone captured her breath.

Persephone smirked into the crook of her elbow. The soil was laid.

“I’m not used to having guests,” he told her the next morning as they sat, just the two of them, at a stone table large enough for a feast. “I can’t feed you. If you eat in the Underworld, you’re bound here.”

“What’s that for?” Persephone asked of a fruit-bearing bowl more than two arms’ reach from her.

His eyes lingered on it. “I like the colors,” he said.

Persephone propped her chin upon her fist. “It must get lonely here.”

“I have many things to watch over.”

“By yourself?” she said. “I don’t doubt your capabilities. Just… it must get lonely.”

“Surely your mother must be missing you,” Hades said, tone sharp-edged. Like digging a trowel into the earth and colliding with a treasure chest, thought Persephone. She didn’t even have to lie.

“Whenever I’ve seen her with you…” he started.

Persephone spared a fleeting wonder on him watching her in return, before retorting, “I know. Whenever I’m around other gods, whom she thinks might whisk me away, she clings. When on earth, she sets me off to task and leaves me on my own. She would hate that I was here, but… I get lonely too.”

The stone’s grown warm under her palm.

“There’s not that much left to see,” he said, after their not-breakfast.
Persephone knew what remained and wouldn’t be dissuaded. So Hades took her to the Field of Punishment, where those who committed crimes against the gods received the retribution Hades determined to match them.

“If someone were to slight me and end up here, what would you do to them?” Persephone asked.

“Depends on their transgression,” Hades said. “What would you have me do?”

“Make them wither,” Persephone said, sure. “Of hunger, forever, with no reprieve, no end.”

“Next time I’m stuck for ideas, perhaps I’ll call upon your aid.”

Persephone spent another long enough day in the Underworld to stay another night. Same for the next day and the next, filling up the week with questions, conversation, and shadowing Hades as he went abound his duties.

“Demeter will notice your absence soon,” Hades said as the first week changed into the second. “She must be missing your help tending the plants.”

“Let her,” Persephone said. Maybe she caught a flash of a smirk from him before his solid expression reset. He could appreciate spitefulness towards family.

Although her time in Hades’ realm had only been a short compared to immortality, she fell into it like a notch into a gear. She woke and washed, then joined Hades for a not-breakfast discussion at the long table with the never touched but never wilting fruit. He made sure Cerebus was feed, checked the strengths of his fortitude, handled punishments for any new souls who made the journey to the Isle of Punishment. Persephone walked by his side, whispering suggestions into his ear, familiarizing herself with the three-headed beast so that it would allow her close enough to stroke his haunch, and watch the comings in on the river Styx.

She was so close, she was sure, in another moon cycle they would surely be wed, with Demeter’s permission or no.

What Persephone hadn’t calculated was how close Demeter kept watch on her daughter, even when far apart. How soon she noted her missing and started her search, neglecting the earth, letting it languish. Mortal lives, so fickle, felt the effects immediately. They began crying to Zeus for rescue from famine.

Persephone’s plan shuddered apart with a single sentence on a morning that had started just like the others.

“You have to leave,” Hades said.

What phantom was this? What nightmare?

“What do you mean by this?” she asked.

“Zeus commands your return to your mother,” Hades said. He stood at the end of the hall, not sitting to share her company at the table. She stood too, not making herself smaller than she was.

“What does Zeus have to do with this? And why do you listen?”

This sounded petty. Truly, Persephone wanted him to start a war over her. A storm may bend a sapling, but it can survive, but it only it doesn’t snap off at the roots.

Hades was famous for his greed. He never let the dead escape and his deep rock of home was veined with all the great metals: gold, ore, diamond.

Did he not possess her enough?

Persephone again spotted the bowl of fruit, rich-colored again the cool rock. She snatched a pomegranate from it, held it cupped tight. She dug her fingernails into its flesh and tore it open with her own desperate might.

She plucked six seeds from the membrane and waited another second. She swallowed the six in one gulp. Finally, Hades moved, caught her wrist.

“You could’ve stopped me,” Persephone said. “You knew what I was doing. You maybe even left the fruit there on purpose.” She wasn’t sure how many of these accusations were truth.

Hades let go of her arm and looked at her then with new knowledge. Perhaps there was even something to the crinkles at his eyes that portrayed delight.

Margery Bayne is a writer of the speculative and the literary, a resident of Maryland, a graduate of Susquehanna University's Writers Institute, and works every day surrounded by books in the public library. More about her and her writing can be found at www.margerybayne.com.