This week, Enchanted Conversation Magazine
presents two Fairy Tale Flash stories:
The Snake of Midas by E.J. Hagadorn
and
The Blank Night Sky by Kyle Bolan
We hope you enjoy them and share your thoughts
with the authors of these mythic tales in the comments section below. 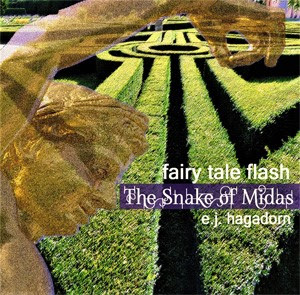 While wandering through a hedge maze where the sun never set, I found myself in a courtyard, one of many I’d seen that day.

I stepped out of the shadowy passage, and the hedges grew and twined behind me until I was looking at a solid wall of green leaves. I knew well that no effort would take me back that way. The path was gone.

And just as before, the other walls of the courtyard had no opening at all.

Circled in by the high yew hedges, a green lawn sprawled out before me, and all around me were statues of gold. Under the clear sky they looked as if they were made of sunlight. Here was an old man kneeling in prayer. There was a young woman tying her hair back.  And over by the other end of the courtyard was a little boy picking his nose. All around me, at least a dozen expressionless faces looked up, down, and back.

As I puzzled over these golden statues, my eye caught a glint of silver.

Wrapped around the wrist of the praying man was a silver snake. Its scales shone like new, but they were tarnished in between, and its eyes were emeralds.

I examined the snake and saw that its back was hinged. I opened it and slipped it off the old man’s hand. Seeing nothing else to do with this bizarre bracelet, I clamped it onto my wrist.

I gasped and wrenched the glove off. Thankfully, my hand was still flesh.

I looked down at the glove. It was a woven net of beauty. I grabbed a fistful of grass and watched as it turned to gold between my fingers.

The elating potential of limitless gold filled me, and I thought of everything I could touch. I looked around for more wealth to make, but the sight of the statues froze my thoughts.

I stood in the midst of a golden crowd.

I looked down at the bracelet. Taking care not to touch my left hand, I pulled and prized with my right. But it wouldn’t give.The serpent gripped my arm, constricting itself, waiting for me to sneeze, or scratch, or wipe away a tear.

I pushed at the bracelet so hard I could feel the bones in my hand straining underneath.  As my fingers curled back, they touched the silver bracelet, and it turned into gold.

The bracelet unhinged and fell, where it lay between my glove and the grass, which had crumbled into piles of golden dust.

I looked up. A dozen piles were wisping and curling away in the warm breeze, while across the way, a gap was growing in the hedge.

Drawing my cloak closer about me, I crushed the snake under my heel and left the courtyard.

E.J. Hagadorn is the author of numerous works of fiction and poetry. He spends his spare time visiting dead authors and making webcomics.
Check out his websites: www.ejhagadorn.com
www.authorgraves.com
Follow him on Instagram: @oscar_and_edgar 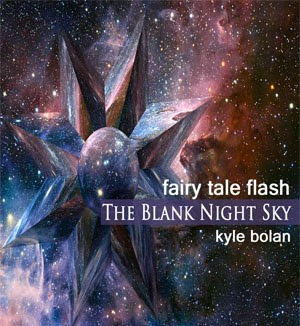 There once was a time when humanity worshipped many godlike beings. The most overlooked of these was the god of men’s psychē who oversaw men’s souls. He was often overlooked because he was no more than a soul himself, a whisper in the wind.

The task given to him by the Deity, the god of all the gods, was to collect the souls of the recently deceased and dispose of them.

He began to place the souls he collected from the deceased up in the night sky, for back in these days, when there was more time ahead of humanity than behind, the night sky was blank and contained nothing but the gaping maw of darkness that characterized the night. He thought this way, the souls could be admired by all the inhabitants of the earth.

Soul by soul, the night sky slowly became illuminated, and death was not feared because it meant a place in the heavens where a person could be remembered always.

So, the Deity, the god of the gods, had the head of the god of souls chopped off and placed in a chest so that he would never again be able to gaze upon the beauty he had created--the stars. The Deity also had the god of souls’ arms removed so he could no longer place souls up in the night sky. His arms were then replaced with wings, for wings represent knowledge. So, giving wings to the god of souls was a perversion of this meaning for he no longer had a head to contain knowledge.

The Deity then placed the god of souls up in the night sky by arranging the stars to create an image of him for all to see, wings and all, to further defame the god who was thinner than the wind.

But, young one, the Deity did not succeed in defaming the god of souls because we still remember him for who he was and what he did for humanity. The memory of him goes on, like the beauty of the stars in the once blank night sky, and my love for you.

Kyle Bolan writes horror, sci-fi, and fantasy stories. He spends all of his money on books and records.
Follow him on Twitter: @KyleBolan