THE SOUND SEEKER by Heather Newton

He began to untwist the sound, gently so its strands wouldn't break... 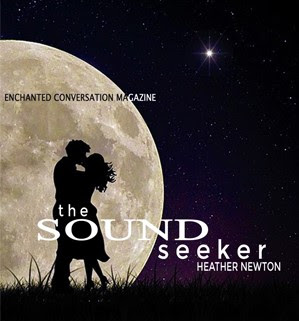 There was once a Sound Seeker who could find lost sounds: the burble of a long-dry spring, the trill of spring peepers to cheer a winter’s day, the splash of a stone skipped six-times on childhood water. If he walked, and was quiet, the sounds would come to him like birds, sometimes in minutes, sometimes in days. Once, it took a year to find a boy’s sweet soprano, lost after his voice changed. When the Sound Seeker found it, the voice was tired and hungry but excited with stories to tell. The client, the boy’s mother, wept with happiness.

The Sound Seeker could find any sound, but words--lost, misheard or forgotten--were his mainstay. Promises mouthed across a crowded train platform as the train blew its whistle, endearments murmured at waking when the ears weren’t primed to understand, wisdom spoken in a visitation dream then lost when the sleeper rolled over on the pillow. “It’s the change of position,” he cautioned. “The slosh of brainal fluids washes the dream away. Lie still and remember before you move.”

His clients sought lyrics to songs, that one ingredient to a secret family recipe, directions to treasure they had buried, but mostly these words: “I love you.”

“Those three little syllables seem to get misplaced more than any others,” he would say. “They are quite my bread and butter.”

It was those three words which led a woman to the Sound Seeker’s shop on a sultry summer afternoon. The heat had caused her to remember a night long ago, when she and her lover made love in the park across from her mother’s house, she on his lap, her striped dress pulled up above her thighs, streetlamps illuminating the park’s fountain but allowing her and her friend the cover of shadow.

Walking back, her lover took her hands and danced her along the middle of the road.  He said something to her in Spanish, a language he knew from his travels. She didn’t catch it and asked him to repeat it but he wouldn’t. If he had, she might have understood. She knew the word amor and could have listened for it on second repetition. But he wouldn’t speak, perhaps already regretting the utterance, if what he said was in fact “I love you.”

She had forgotten that night, and that lover, but as today’s humidity tugged her hair into curls, she felt a searing longing for both.

The bell over the door tinkled when she entered the Sound Seeker’s shop. He was speaking to another customer, a bereft young man. “I cannot help you if your father never spoke the words.” The young man ducked past the woman and out the door, in tears.

The woman told the Sound Seeker what she wanted.

“Since the words were spoken in another tongue, I will have to unbend them when I find them, in order for you to understand,” he said. “There will be a small additional charge.”

She readily agreed, and the Sound Seeker set off in search of her lover’s words. He found them easily, in a tree near the park where they were first spoken. He coaxed them down and sent a message to the woman to come for them.

When she arrived at the shop, the Sound Seeker was holding her lover’s words. “Are you sure you want to hear them?” he asked. “I cannot be responsible if he was asking you to pass the milk.”

The woman held still for a moment, considering her choice.

When her lover left that night for a three-month voyage, she was important to him. When he returned, she wasn’t. She met his ship thinking she would have him to herself. The smell of tropical travel was strong on his body. He had her drive the carriage to a homecoming party for his traveling companions. At the party was the ship captain’s young daughter, whom he had comforted on their travels when a local man overstepped his bounds and frightened her. The woman’s lover had saved the girl and she worshiped him. He liked being worshiped.

The woman’s lover had spoken his words to her in summer and they dissipated on a humid breeze. If he had uttered them in winter, maybe they would have frozen in the air, long enough for her to hear him say he loved her.

She nodded to the Sound Seeker and he began to untwist the sound, gently so its strands wouldn’t break with their bending back.

The woman leaned close, cupping her ears. This time, she would not miss the words.