PETER OF THE PIGS by zteve t evans

The story of a sharp lad
who met someone sharper... 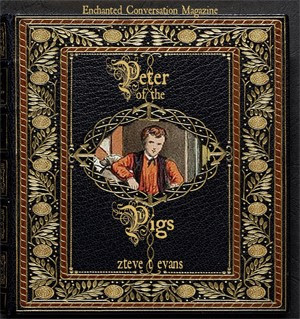 There was once a very sharp and very clever boy name Peter whose job was looking after the pigs of his master and because of this he was known by all the local people as Peter-of-the-pigs. One day he was visited by a man who asked him to sell him seven pigs.  Peter being very sharp and very clever saw a way he could profit from this so he said,  “I must keep one but I can sell you the remaining six, but only if you chop off their ears and their tails and give them to me.”  The man agreed to the deal and cut of the tails and ears of the six pigs and as he drove them away Peter gleefully put the money in his pocket.

Of course this was all very clever business but how was he going to explain the missing pigs to his master?  Well, this is what he did. He took the remaining pig to a sand pit and half buried it in the sand. Then he carefully placed the ears and tails of the six mutilated pigs so that part of them poked out of the sand. Next he ran as fast as he could to his master crying, “Help, help, help, the pigs are stuck in the sand, come quick and help me get them out!”

His master was at home and hearing the commotion went out to see what the matter was.  As soon as he understood he followed Peter back to the sand pit to see one of his pigs half buried in sand and just the ears and tails of the other six poking up through the sand.  Peter ran up to pig half buried in the sand and while he grabbed its ears and pulled and his master grabbed its tail and pulled and together they hauled the pig sideways out of the sand.  Then they tried the same thing with the ears and tails that were poking through the sand and the master was shocked to find the ears and tails simply appeared to break off in their hands.

“We need to dig them out!” cried Peter“Quick Peter," cried  his master, "run back to the house and ask my wife for two shovels!”

Peter knew his master kept his money in two bags and ran back to the house and said to his wife, “Master says you must give me his two money bags quickly!”

This did not seem quite right to her and she said, “Surely he does not mean both of them?”


“Yes, yes he said both of them. Go and ask him yourself but be quick!” replied Peter.”

So she ran from the house and shouted to her husband,  “Did you mean both?”

“Yes, both of them, do be quick!” he shouted back thinking she was talking about the shovels he had sent Peter for.

So his wife ran back into the house and quickly gave the two money bags to Peter who ran quickly from the house carrying the two bags and laughing to himself at his cleverness.  He did not take the money bags to his master but ran off with them. With these and the money he had made from selling his master’s pigs he had a tidy sum of money to help him start a new life.

Well, they say birds of a feather, flock together, and Peter fell in with a robber.  However, the robber, being a robber, robbed him of his bags of money.  Realizing he had been robbed Peter ran after him and caught up with him just as he was skinning a deer he had just stalked.  He had already cut out the deer’s liver and placed inside his shirt to keep it safe when Peter arrived. When he saw Peter coming after him he reached inside his shirt and pulled out the liver and threw it away so that he could run faster.  Peter saw this as he shouted for the robber to stop, but the robber called back over his shoulder,

“Ha! if you want to catch me you will have to throw your liver away!” and sped off.

“I‘ll catch you!” he cried Peter and taking out his knife he sliced out his own liver thinking he too would run faster, but instantly fell down dead.

His master had set off looking for him hoping to get his money back and there he found him dead upon the wayside.  He looked at him and said,

“So Peter-of -the-pigs you were very clever and so sharp you cut yourself when you found someone cleverer and sharper than you!”

In April 2013, zteve launched his first blog that focused on legends, myths and folktales from around the world at Under the influence!. This has has grown steadily receiving visitors from 189 countries around the world so far. He has contributed  articles to the #FolkloreThursday website regularly since its launch and haunts Twitter here, @ztevetevans