The family man wanted a silver sword,
not for fighting, but for killing... 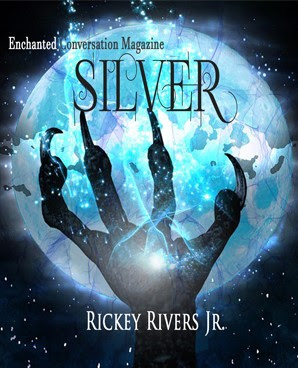 The evening sun warms the deep forest. Here you will find a single cabin. Inside you will find the man, doing what he does. From a distance you can hear the clanging, get closer and you will see the shadow, large, moving on the inside walls. Even in these times, when a blacksmith was thought to be unneeded. A good blacksmith would always find work.

One time, he had been requested to forge a shield for a lowly knight, this shield needed to be light yet thick enough to withstand the breath of a great dragon. And the blacksmith did forge that shield, and the shield was indeed strong. The knight had been thankful and paid the blacksmith handsomely.

Another time, a young woman had come to him in need of a dagger. This woman did not have much money but the blacksmith, perhaps feeling pity (the woman looked to be abused), obliged, and was able to fashion a thin iron dagger. When the same young woman later married into a royal family, she returned to the blacksmith and paid him more than enough for his effort. For this, he was thankful.

The blacksmith cared not what the weapons were for, he made them to live, and this was, for him, an honorable profession. To some, this skill was only that, a petty skill. But for the blacksmith, this skill embodied life itself. Without it, he could not imagine himself doing anything else, at least not enthusiastically.

His profession was a useful one and he, a trustworthy man. So this time, when his current task had been proposed to him by a customer with not much to offer, he hesitated, but then he remembered the young woman from before and accepted the job cautiously. To better this deal, the customer, a family man, had donated a bag of coal for the blacksmith’s fire and the blacksmith did appreciate the barter.

The family man wanted a silver sword, not for fighting but for killing. The blacksmith did not argue. It would be easier to make a weapon that was only for flesh and would not need to pierce armor or break shield. It would not take him long to complete this task.

Almost immediately, after materials were gathered, the blacksmith began his work. For days he worked on the weapon, hammering, searing, grinding, bending, melting, and sharpening.
In past times, with larger amounts, the blacksmith could engraved a name on the sword, or, if wanted, a symbol. But in making this sword, he had to remind himself of the weapon's purpose.
In some moments he thought of who the weapon might be for but he hushed himself, it was not business that mattered to him. In fact, it was dangerous for a blacksmith to get involved in the business of others. He had to remain unbiased and open to forge for any and all who approached, without judgement. After all, the money would spend the same. Who was he to judge? Who was he to care?

Over time, after days of labor, the sword was formed. It sat in the cabin, oh how it shone, and he was satisfied with his work. Now he need only wait for the sword retriever.

From the view of his oak chair he eyed the weapon. The sword reflected the light of his fire pit, a beautiful sight. He was proud of this blade but soon it would leave him, like all his forgings. And then, once more, he would be alone, cleaning his work space and waiting for a visitor.

Somewhere off yonder you will find a field, near a barn. Near the barn a farmhouse, inside this farmhouse lived a family. Presently, this family, were all in the same room. The father standing, worried and mumbling, the mother sitting, angry and bothered, and the son, lying on the bed between them, sleep. There was a silence in the farmhouse, in the room, but the minds of two wandered.

The father, blaming himself, thinking of the incident, him trying to protect his son but not being able to, the mother, angry with her husband, blaming him, even for things she knew he could not have prevented. Truthfully, neither parent could blame themselves.

The incident: the mother did not understand the nature, all she knew was that on that night her husband had carried their son across a field and her son had been exhausted and bloody. Secretly, her husband had taken him and cleaned him and laid him to rest. She knew that her husband was not telling her the whole truth, only a version. She knew that he had been trying to protect her but she also knew that her son could not be blamed for his actions. The boy had been passed out in a field, naked, around him, slain cattle, his doing. The image of that night had stuck with the father.

In some ways, the mother resented her husband. Though, she understood resentment was foolish. She did not have anyone else to blame and she for sure would not blame her son, her only child, for he could not help what he became.

Once before, a home doctor had come and tried to diagnose the boy (vitals and such) but the child had tried to bite him and had to be held down and sedated. The doctor gave the parents a vial of medicine to help the child but the medicine would only work for so long. Eventually, both parents knew what had to be done but only one of them accepted the idea. The other wanted desperately for there to be another way.

The mother had once gotten a holy man to come and pray for the house and their son but that did only raise her spirits. It did not and could not cure the child. On that day, the holy man had been afraid of the boy but he did not reveal this fear.

The father knew, after the episode with the cattle, what must happen, though he could not do it himself. He had told his wife the deal and laid it out fine but she would not accept it. That is, until one time, when she saw her son change before her, the drool, the snarling, the growth. At this time, she knew.

The week prior, they had prepared themselves and their son. The mother had made his favorite meal for him, every day that week. And the father had taken him hunting and fishing and the son had been happy and seemed normal enough but they both knew better. They had known the changing would happen, as it had, at night, when the moon rose full and all was quiet. At those times, he roamed. It was for this reason that they had kept themselves locked in their rooms, it would offer protection, just enough for him not to break in. But sometimes, they wondered, if the child truly wanted to harm them, after changing, he could. They could not prevent him from doing so. Furthermore, no amount or strength of medicine could. The thought of this worried the father.

Presently, their son rested, given sedation medicine an hour before, a bit too much, but purposely. His legs and arms were bound with leather straps (suggested by the holy man) but that would only hold for so long, so long as he stayed human. The mother had kissed his forehead and the father had done the same, both solemn. Both regretting what had to be done but only the father accepted this reality. The mother still, in some way, wanted there to be a chance.

The whole week she had prayed. And at this time she prayed, hoped, that something could save him, from this changing, this curse. But her prayers were interrupted once she thought of what her husband had once said: “What if he gets into town? What if he kills an actual person? We won’t be able to see him again, the townsfolk, they would hunt him down.”

And then her tears did flow and she felt herself weak for not stopping them. And when her husband saw her crying he went to her and did wrap his arms around her and both parents wept.

And then, upon hearing this, the boy began to move in his bed, shifting and twisting, his bindings held tight but only tight enough. His mouth foamed, his limbs elongated, his teeth sharpened and his skin bristled.

Soon there would be a knock at the door. Following that, a man would enter, in hand a gleaming blade of silver. And whose side would time favor?

Rickey Rivers Jr was born and raised in Mobile Alabama. He is a writer and cancer survivor. He likes a lot of stuff. You don't care about the details. He has been previously published in Every Day Fiction, Fiction365, Fabula Argentea, ARTPOST magazine (among other publications). Check out some stuff from him here, https://storiesyoumightlike.wordpress.com/. You may or may not find something you like there and that's a promise. 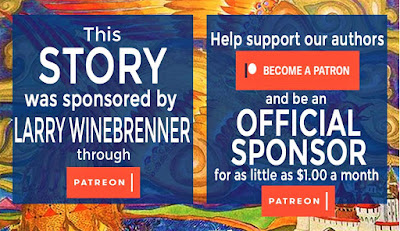