ROSE PETALS AND BRINE by M. A. Ray

There’s a price, my dear,
There’s always a price… 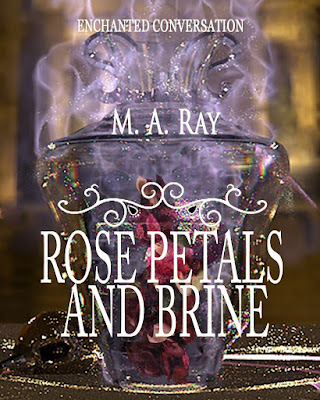 Let me tell you a story.

Once upon a time, there was a witch with one white eye, one black. The white eye was white as spilled cream, as blue as driven snow, and it saw the world of spirits. The black eye was blacker than pitch, as blue as the feathers of a crow, and it saw the world of the dead. To the living world, where people walk, she was blind, because there's a price, my dear, there's always a price.

The witch had a stick, which she used to feel her way around her little house in the swamps, but if she lost it, which she sometimes did, she had trouble until she could find it again. She wasn't quite used to seeing the things she saw, not yet. She'd gone most of her life seeing things the way anyone does: over there, the table, and next to it the chair, and so on. But now she saw the spirits of the wood that had gone into making the table, and the soul of the flax used to weave the chair cushion. She saw the chipmunks and snakes and squirrels, every animal that had died here, down to the last spider.

Sometimes she screamed at what she saw: the breadth of it, and the depth, like the wide sea. She remembered that sight, the glittering top of it. She remembered her father's tobacco-breath whispers of what waited beneath the surface, the monstrous mermaids and the shining serpents. The mystery beneath the waves was like her mystery now, a mystery so great she couldn't contain it.

In all her time, she had never laid eyes on a man she wanted to see the rest of her life. She couldn't imagine waking up next to the same bristly face again and again, watching it soften and fall with age, watching the stubble gray and whiten like twigs covered with frost. It had seemed no sacrifice to give up her living sight, but now she could never see it even if she wanted to, and she felt the loss so much she had retreated from the village into this little house.

She remembered her father's face. When she closed her eyes, she could see his smile. Once, down at the well, she had spoken to the last remnants of him when his bones went warm seawater-soft, unable to contain him any longer. He did not approve of how she supported herself now, but he hadn't called her any names. He'd only looked concerned.

"Silath," he had said, "honest work never hurt anybody."

"No," she'd agreed, "but what honest work is there for a woman who's blind? I'm an excellent witch. I give all the little boys the creeps."

A thin line had appeared between his brows, the way it used to; his forehead had wrinkled just as she remembered. "That may be so," he'd said, and then he was gone, never to return in the land of the living or of the dead.

She had put it from her mind; most days, it was far away from her. Now she sold seawater in little bottles with bits of rose petals floating inside: love potions. Now she sold wormwood, tansy, and rue to girls whose love potions worked too well; now she sold ginger, garlic, chamomile, rosemary. The spirits of the plants spoke to her, and she found each one by touch, by sight of their souls. People brought her milk and honey; the last one to bring meat was Obadiah the butcher, and she screamed and threw him out of her house. The soul of the cow it had come from stared dolefully at her, and she couldn't bear to eat it. They brought her bread and sometimes, not often, they brought her a little coin with a hole punched through it.

That was Silath, and that was fine. She didn't have the least problem with her life, except that even when she felt lonely she was never alone. The spirits and ghosts crowded in around her when she most wanted to be left to herself, and she supposed it must be a bit like that to have children. (Silath would never know for sure if her idea was correct, but as it happens, she was close enough.)

Today the spirits and ghosts were giving her a headache with their constant bouncing and whizzing. She couldn't hear them--hadn't traded her ears--but they whirled and swirled and bounded around the room until she had to shut her eyes. Even then she could practically feel their wild excitement, like buzzing on her skin. She was cranky about it, too, so when the knock came at her door, she snapped, "What is it?" in her least businesslike way.

"May I come in?" said a girl, muffled through the door. She hadn't come before, or Silath would have known her from her voice.

"Yes, yes, come in," Silath said hastily. Her hand went to the front of her dress; she knew it wasn't on back to front, but she'd checked so often she did it on reflex.

The door creaked, loud on its hinges, the way she liked it, and a soft step came on the boards of the floor.

"Hello. I heard you sell love potions. Is that true?"

"It's truer than it isn't," said Silath, playing her Professional Witch role to the hilt. "Is that what you're after, little girl? You want to make a man fall in love with you so hard he can't see anything but you?"

"Well," said the girl, "not quite. But they do work, these love potions, don't they?"

Silath heard the girl's foot shuffle back and forth, shy. "They work more than they don't," she said, grinning huge and ghastly.

"Hold out your hand," said the girl, and when Silath did it she put two coins in the palm, unpunched and perfect.

Silath felt them, felt the faraway king's face standing out like the coins were new. She bit one, and her teeth sank into the metal; real gold, heavy, chilly on her tongue. "This is too much," she said.

"If you insist," she said, and found her stick just where she'd left it, to the side of her rocking chair. She used it to lever herself up and tapped the floor over to the shelf, though she knew where it was, knew exactly where the potions were. She could see the faint dying spirit of the rose she'd used to doctor the seawater, its petal clothes curled and dry as paper, and she found just the one. "Here you are."

The girl said, "I want you to drink it."

Silath couldn't help herself. She laughed and laughed, and the spirits and the ghosts covered her like a cloak. "Is this some kind of revenge?"

The girl's tone was so matter-of-fact it burned. She didn't move, and there was no change in her breathing. "No. I just want you to drink it."

That didn't even deserve words. She tore the cork out of the little bottle with her teeth, drank the fierce saltwater down to the last drop, and flung the bottle to the floor. It shattered there like her own heart, and she lifted a bare foot.

"Stop!" the girl cried, as she stamped down on the fragments.
Silath stood there with blood seeping from her foot and tears seeping from her eyes, one black, one white. "Was that what you wanted?"

"No," said the girl. "I wanted to see if you'd fall in love with me. I guess you didn't, but sit down and let me clean this up. It doesn't have to hurt to try, you know," she added, with a smile in her voice.

"It does," said Silath. "Trying always hurts. There's always a price."
Deftly, the girl plucked shards of glass from Silath's foot. "Well," she said, "we both paid one. Shall we try?"

Her name was Rowan.

M.A. Ray keeps their meat shell in Wisconsin. Where they keep their heart, they will not say.
https://twitter.com/menyoral
https://menyoral.blogspot.com
https://www.amazon.com/M.A.-Ray/e/B00IREBFUU/