Wouldn't being a frog-prince be way
mind expanding? That guy would
get why I felt so much like a
fish out of water... 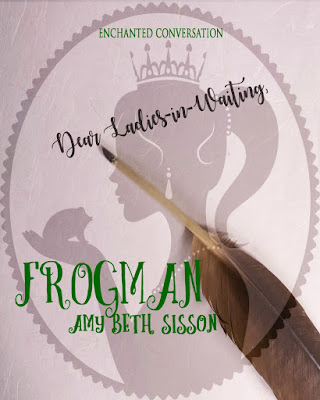 So ladies, I did it, even though you warned me that happily ever after is just for fairy tales.

You all know how sick I am of the princes my parents keep foisting on me. Good-looking, competent in a ballroom. Boring!

Anyway, last week I saw this frog at the edge of the pond near the witch’s cottage. He was bright green and intelligent looking. You remember my favorite fairy tale, The Frog Prince? Wouldn’t being a frog-prince be way mind-expanding? That guy would get why I felt so much like a fish out of water. I didn't quite believe anything would happen if I kissed him. But I’ve never been the kind of princess who’s grossed out by a little slime. I touched him with my lips and poof -- a handsome prince appeared. His mouth agape and eyes discombobulated. Naked. Imagine my shock when breaking the spell didn’t restore his clothing. I led him to the castle and brought him some of my father’s old clothes. After he dressed, I took him to meet my parents. They’d never believe he’d been bewitched, so I said he was a lost prince from far-away.

My parents can really overreact. They put him on house arrest! Because they didn’t know his parents. Ugh!

Anyway, I snuck in to see him that night. The guard outside the guest room was asleep, and I slipped past. The bed was empty. Through the open bathroom door, I saw him soaking in the marble tub. His eyes were half closed and filmy like his tears were egg whites. His tongue was poking out the side of his mouth. It was not a good look.

I slipped behind the bedroom curtain glad he hadn't seen me. Suddenly, there was a pop and we both jumped.

A woman with red hair stood near the tub. It was the witch who lived near the pond.

He obeyed and stood there dripping.

“What have we here?” She grasped his chin. “A bit googly eyed,” she said. Then she pinched a piece of skin on his cheek and rubbed it between her fingers. “Paper thin. And so pale it's almost green. It's as I thought,” she cackled. “The princess doesn’t even know who she really is.”

She smiled right at me and I almost jumped out of my own skin. I’m embarrassed to admit I didn’t realize what she was talking about. Not yet.

The witch looked back at the prince. “I’ll fix it so the King and Queen will release you. But you'll turn back into a frog at the next full moon unless the princess kisses you again.” She snapped her fingers and disappeared.

My mother got a letter that morning from the rulers of a very wealthy kingdom about their lost son, Prince Francis. My mother asked me to give the Prince the grand tour.

I showed him my favorite part of the castle, the secret passages.

“My castle’s secret passages are filled with gold,” he said.

Talk of gold might have impressed my mother, but I’m not into that. He didn’t ask me anything about myself. Ugh!

Kissing him once was a mistake that I would not repeat. On the evening of the full moon, I met him near the pond so he’d be near water when he turned back into a frog. I noticed the witch lurking nearby.

“You’re pretty,” he said. “Pretty ugly.” He laughed. I didn’t. But he kept talking, “Seriously, you’d be pretty if you smiled.”

I was so relieved that I would be rid of him at moon-rise.

Then, he grabbed me and kissed me. I wrenched away, spit, and wiped my lips. “It has to be me that kisses you, you stupid little worm.”

The prince vanished. Now it was me who was discombobulated. The moon still hadn't risen, so he shouldn’t have transformed.

The witch strode over.

“What a delightful little witch you’ve turned out to be!” she said, pointing at the grass. “See!”

I looked down at the spot where the prince had been standing. A worm was there. Even though worms don’t have eyes, it seemed to look at me longingly. Then, a nearby frog's long sticky tongue reached out and flipped it into its mouth.

You’ve probably noticed I’m not around the palace anymore. Visit me at the witch’s cottage. This might be my happily ever after, after all.

Amy Beth Sisson lives in the Philly area near Gritty and all that jawn. She started her career as an attorney but now writes stories for humans of all ages in an effort to restore her soul. When not writing, she spends her days working in software development. She tells computer programmers what business people want and tells business people why the programmers can't quite give it to them.
Follow her on Twitter @sissonab