HER PLACE by Rob E. Boley

I looked back and saw braided hair,
dangling like a golden ribbon bookmark
left untucked upon a novel's spine... 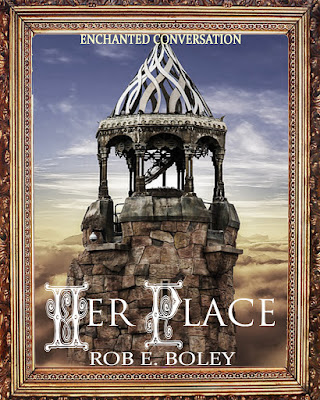 I sat in that tower for endless days, bewitching bluebirds and grackles to bring me seeds to eat and tossing buckets of my own piss and shit onto the blood-stained brambles below. To pass the time, I read my adopted daughter’s diary and braided lengths of her golden tresses, her impossibly long hair that in a fit of rage I’d snipped with my scissors before abandoning her pregnant and alone in the wilderness.

In retrospect, I was perhaps too harsh with her, and no less so with the man who’d defiled her body—the foolish prince who I so easily provoked to jump out of the tower. Yes, I even charmed the thorns to rake out his eyes so that he never again could gaze upon my daughter’s beauty.

Full of jealousy masked as indignation, I split those traitorous lovers apart and rendered them blind and bald, lost and pregnant. Why? So I could brood and braid in my lonely tower, my heart festering like so much shit and piss in a bucket.

Well, I finally kicked that bucket right out the window and climbed after it down the epic braided length of her hair. I was perhaps thirteen steps from the tower when I chanced a lookback and saw that braided hair dangling like a golden ribbon bookmark left untucked upon a novel’s spine.

“Is this book finished or not yet begun?” I wondered aloud. “Or has the reader merely lost her place?”

The birds in the surrounding bushes answered with curious tweets, and I hushed them with a waggle of my fingers. I knew what I had to do, as much as I loathed what would come next.

I came upon the blind prince some nights later. He crawled along the forest floor like an overgrown bug—half-starved and half-eaten by insect bites. The poor fool could barely be considered alive. Shaking my head, I coerced the mosquitoes to return his blood, the ants to regurgitate his flesh, and the bees to nurse him patiently with honey.

From a distance, I taught a mockingbird all the notes of my daughter’s favorite song, the one she used to sing while I combed her hair—some simple foolishness about roses, rivers, and thorns. Twittering this tune, the bird led the revived yet blind prince through the forest, bumping into trees and stumbling through brooks until at last he came upon my daughter’s pitiful shack.

The sad structure leaned like a drunk and featured only one broken window. It had no chimney. I supposed she must have found this hovel abandoned and settled here to give birth. Tears welled in my eyes at the thought of her straining upon a dirt floor. I should have been here to help her instead of brooding in that cursed tower. My daughter needed me here, wiping her brow and easing the infant from her womb. Well, I was here now, at any rate.

The prince fell upon her doorstep too exhausted even to knock. Soon my daughter came to the door carrying not one but two babies in her arms. I hardly recognized this young woman with her raw eyes, milk-bloated breasts, and short golden hair like the fuzz of a honey bee.

How I yearned to call to her, to beg for her forgiveness, and to cuddle with my grandkids but I knew that was fantasy. My place in her life had fallen to oblivion. I had only one gift yet to give to this tired woman standing at her threshold and gazing down at still one more helpless mouth to feed. Her weary eyes were dry, dare I say empty.

The mockingbird landed on my shoulder and I stroked its feathers. After conjuring a bit of magic and orienting myself to my daughter, I tore my own eyes out of my skull and crushed them in my trembling fists so that each was as small as a pebble and clear as crystal.

I threw them blindly toward her face, where I have to assume they splashed and spilled as if tears and dripped into the prince’s empty sockets. Soon they must have blossomed into fresh eyes because he said, “Rapunzel I can see! I can see, my love!”

“It’s a blessed miracle,” she said and I could hear the smile in her voice. “Children, meet your father. Father, meet your son and your daughter.”

I didn’t linger to hear the rest but instead whispered for that mockingbird to guide me further into those woods. For days, I trudged through puddles, brambles, mud, and root-infested dirt. At last, I came to a cave—a tidy space with a ceiling full of bats and cool damp walls. I have been here ever since and though I may not know exactly where I am I take great solace that I’ve finally found my place.

Rob E. Boley grew up in Enon, Ohio, a little town with a big Indian mound. He later earned a B.A. and M.A. in English from Wright State University in Dayton, Ohio. He’s the author of The Scary Tales series of dark fantasy novels . His short fiction has appeared in several markets, including A cappella Zoo, Pseudopod, Clackamas Literary Review, and Best New Werewolf Tales. You can get to know him better by visiting his website at www.robboley.com.
Twitter: http://twitter.com/robboley
Instagram: https://www.instagram.com/robboleyauthor/