INTO THE REALMS OF A SUMMER'S DREAM by Shobana Gomes

It is the night of a summer's dream,
rousing the ones who dare sleep
to a kindling awareness... 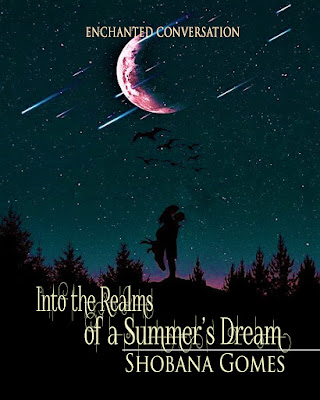 This night is unlike any other nights. The hand of mysticism is emblazoned across the universe. A wild call of the night wolf coincides with a comet that blazes its fiery breath, lighting the darkness in a streak of reddish-white, stimulating the sky to its awareness.

It was a night of dreamless slumber. A night for shadows, the night when a woman’s song filters through the quiet winds that carry moments of nostalgia to a distant mortal.

The quiet of her figure draped in blood colors, sprinkled with silver dust, walks nimbly, barefoot across the meadow, which stays invisible in its greenish attire.  For the only light that passed the sky that night, was the one stolen of a comet, rushing to fall into another lightless world.

Had its passing woken up the night owls, sitting smug on branches hidden?

The air crisp, even salty to her parched lips, she is one woken to a silent thirsting need.

It is the night of a summer's dream, rousing the ones who dare sleep to a kindling awareness, and she, in a sudden incitement, a vision unparalleled becomes her apparition.

She kneels on the wet grass, looking up at the dark nebulous sky, its façade unfathomable.

She sings, her soulfulness infallible, her voice poignant, “O where does thou hide? Could it not be with me in this dark? The meadows could be our playground, the starless night our secret dwelling, for none can see us or pry.”
The winds rush about, disturbed by her soulful cry, the night owls wake up to the sound of a sensuous regale, while the night wolf strays somewhere far, trailing away from the diversion of seeking a prey.

A flash of lightning jarring in its spark, lifts the night sky away from its dark.
She weeps silent tears as she continues her serenading, numbed by the throbbing pain of a blistered heart.

“O why do thou keep us apart? Is it in vain? My cry, a crumbling of words. Take me with thee, to that land that thou live, for the only life I have is as fate reveals, destined with thee!”

The thunder roared its rage, in evident displeasure. It didn’t like that the woman seared with such aching, baring her soul, of her agony to an uncaring world.

Her knees now soaked by the wet grass, through a robe that holds water, weighs in heaviness. She sits now, still looking up to the sky as if for an answer.
She closes her eyes after a while. Her seeking carrying with it a sword of twisted pain.
Then, she saw him. The man who held her heartstrings. He walked down through a guided light, through a sliver of dazzles that blinded her. Like a sculpture of God-like image, he descended upon her.
Silent in his tone, awakening her senses with his eyes, endearing her sensibility to encapsulation, she betrothed his form against the golden light.

His stature masked by the luminosity of the light, shone in brilliance. She fell under his marked spell. Could this be of a dream? This stature of an agile body that shone in brilliance before her, one that had captured her mind, silent adoration filling her abnormally deadened heart.

In the silence of her heart, she woke to his love. The deafening sound of her heartbeat, irrelevant, as his guided footsteps covered the distance between them.

Tied to a tangle of a cobwebbed heartstring, she sat still, unable to lift her conscious body, her eyes fixated to the spot where the golden light blazed its presence.
Rooted amid a conscious tingle of sensation that ran through her veins, dispelling the notion of staggering improbability, her man assumed the vision of resurrection.

Gentle in its swishing, the leaves of the summer sway, brandishing images of different shapes and sizes against a colorless night.

Somewhere further into the deep, a wolf calls his mate. A coaxing howl, fearlessly cajoling, for it knows that it is a night like no other. The woman has found favor, she was now in the realms of her summer’s dream.
Her heedfulness now averted, she looks away for an instant, lost in her attentiveness to the figure that now stood over her. He breaks her momentary neglect, lifting her still frame into his arms.

Cradled within his embrace, he retreats with her, into the stratum of a pristine void. The golden light coalesces as it ascends the throes of a twosome's flight, the vision now an atonement.

Shobana Gomes writes poetry, short stories, articles, novels and is a published author. She is also a book reviewer. She is married and resides in Malaysia.
Her social media accounts:
https://www.twitter.com/shobanagomes
https://alittletimewithshobana.blogspot.com
https:/www.facebook.com/poemandrhymes