Their grey bodies surrounded her.
Their howls swept through her
like a winter wind... 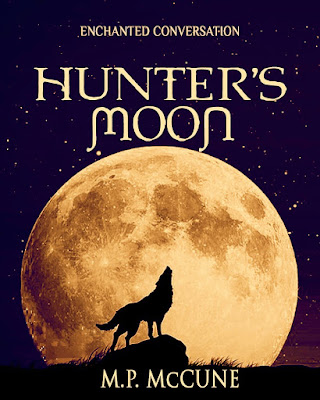 When she first met the wolf, he was a man. He sat on a fallen tree trunk by the side of the path leading to her grandmother’s house, clothes perched uneasily on his slight frame, his clean-shaven face luminous in the trees’ shadows. They acknowledged each other with a nod, as people do when they meet in the woods, and he fell in step beside her. His silence wrapped around her like a blanket, protecting her from the sharp edges of the sounds of the forest: twigs snapping, squirrels scolding, the cry of a horned owl. When they reached the clearing where her grandmother lived, he walked on, leaving her with a farewell glance to mark the place they’d parted until they met again.

The house treated her like a stranger. Its windows stared blankly as if they’d never seen her before and the boards of the front porch shuddered indignantly at her touch. Shadows spilled out of the half open door, lapping at her feet until an undertow of darkness pulled her inside.

The next morning, the whiteness of the girl’s skin alternated with purple bruises, resembling the pattern of sunlight filtered through tree leaves.

“It’s hunting season. We don’t want anyone to mistake you for a deer,” her grandmother said from behind her, draping a red cloak over her shoulders. The girl shook like a wet dog, throwing off her grandmother’s touch.

The girl had a closet full of shawls and sweaters from past visits: “to protect her from the wind,” “to shield her from the sun,” “to keep the rain off,” “to keep the warmth in.” Curious glances stuck to pretty clothes like flies to a web, keeping anyone from looking beneath them.

“Run along now! I’ll see you next week!”

The man joined the girl on her way back. Wind fluttered the cape, exposing her arms. They walked in a silence brittle as ice. When they reached the forest’s edge, he loitered under the trees to listen to her mother scold her loud enough for the people at the end of the street to hear: “Just look at you! How many times have I told you not to leave the path, it’s dangerous! There are wild things in the woods, you’re lucky you only had a fall!”

The next time she saw the man, he was a wolf. He sat alone in the meadow between the village and the woods the night of the full moon, staring at her window. When their eyes met, he nodded. She climbed out and followed him into the trees. More wolves met them one by one until restless grey bodies surrounded her. Their howls swept through her like a winter wind, scooping up her voiceless anguish and carrying it with them out into the air, leaving her empty. She fell asleep in their midst but woke up in her own bed. Muddy footprints too large to be her own trailed to and from the window.

Every week the man waited for her at the edge of the forest, until the day of the next full moon. She walked slowly until the sun sank, then raced the moon to her grandmother’s house. Light streamed through the windows and the open door. Her grandmother’s body sprawled across the floor, dozens of wolves eddying around it. One nodded at the girl. She nodded back.

“Wolf! Wolf!” the girl cried as she ran into the woodcutter’s cottage. “In my grandmother’s house! It attacked her! I think she’s dead! Help!”  She turned without stopping and ran back to the house. The woodcutter snatched up his axe and followed.

The girl stopped at the door and pointed wordlessly to a lone wolf worrying the body of the old woman. The woodcutter pushed past and ran inside. When the wolf leaped at him, he knocked it to the floor with his axe. He chopped off its head and kept chopping until it was all in pieces.

“What was your grandmother thinking to leave the door open like that!” he asked.

“She was expecting me,” the girl said. “She didn’t want to have to get out of bed to let me in.” She burst into tears.

He reached over to pat her hand, but stopped when he saw his own was covered in blood.

“You’re safe now,” he said. “It was a lone wolf, not a pack. You can stay with me tonight and I’ll walk you home in the morning.”

“I’m not allowed to go with strangers.”

The woodcutter was at a loss. “But you can’t walk home through the woods by yourself at night!”

“By yourself?” He glanced at what was left of the wolf and her grandmother.

“The wolf’s dead, so there’s no danger. Besides someone needs to clean up and watch over her body.”

The woodsman hesitated. “You’ll shut the door after me?”

Once he left, the girl reassembled the wolf’s carcass. As soon as they touched, the severed pieces knit themselves back into one whole and the wolf opened his eyes. He nodded.

They dug a hole together behind the house, then dragged the body outside and rolled it in. The girl shoveled in clods of dirt that fell on her grandmother like blows.

Before they left to join the others, the girl covered the grave with the red cape.

M.P. McCune lives in New York City with her family, which includes a bearded dragon. She primarily writes flash fiction and creative non-fiction. Her work has appeared or will be appearing in Atlas and Alice, The Journal of Compressed Creative Arts, The Mythic Picnic Tweet Story Project and The Vestal Review. She frequents Twitter as @MPMcCune2