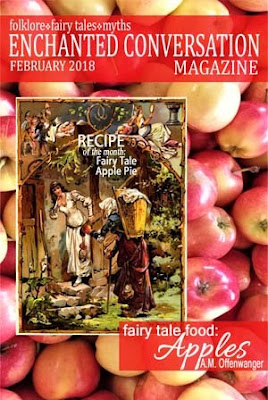 February, my local produce store informs me every year, is Apple Month. It might be only British Columbia who celebrates apples now, at the half-way point when last year’s harvest is just a memory and this year’s not even a twinkle in the honeybees’ eyes yet. The rest of the Northern hemisphere seems to celebrate Apple Month more logically in October. However, February is a good month for apples.

So I was thinking of food in fairy tales, and apples were one of the first things that came to mind. There are lots of them, fairy tales with apples, I mean (here, for example, one blogger made a list of some of them). One of them is the story of “The Golden Bird” (Grimms #57), which is similar to the Russian “Tsarevitch Ivan, the Firebird and the Gray Wolf”. Both stories begin with a king’s magic tree being robbed of its golden apples, and a young man being sent out to capture the thief, a golden or Firebird, depending on the version. It’s a quite extensive story with escalating robbery that eventually results in the young man getting a beautiful princess to marry, which just goes to show that you never know what you’re going to get when you start with apples. I would recommend Golden Delicious for this purpose.

The best-known fairy tale apple in Western culture, however, has to be the one from “Snow White”. I don’t think that the witch used any currently known apple variety, as the Grimms specifically state that she “made” the apple, with one red cheek and one white one (which was smart of her, as it allowed her to identify the poisoned bit so she could get Snow White with the “Look, it’s safe! I’m eating it too!” trick). Ambrosia apples might fit the bill as far as the two-tone variety goes, but I can assure you that our local ones are not-at-all toxic.

If you’re too greedy about eating one, though, you could still end up with the Snow White effect, which was in essence to choke on the apple piece. In the Grimms’ version, the breaking of the curse comes about not through True Love’s Kiss (sorry if that destroys any romantic illusions for anyone), but through one of the dwarfs tripping while carrying the coffin, which makes the poisoned apple piece pop out of Snow White’s throat. When you think of it, that’s much more logical than having the poison neutralized by smooching, but I guess Disney wanted to go with the romantic version and give the poor prince something to do other than just be decorative. 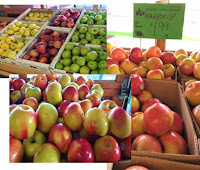 Here is another thing that Disney introduced into their version: the witch gets to Snow White through her housewife’s ambitions. “It’s apple pies that make the menfolks’ mouths water!” she says to the girl, who is busily baking gooseberry pies for the dwarfs. (Why Snow White doesn’t get suspicious when the witch offers her the one bright red apple in her basket instead of one of the green ones is anyone’s guess…) Well, the witch might be wicked and devious, but she’s got a point. Gooseberries are all fine and dandy, but apple pies are truly wonderful.

So here’s my version of apple pie, guaranteed toxin-free if you don’t buy your apples from a warty-nosed old peddler at the door.

FOR THE CRUST: Your favorite recipe for a 9 inch double-crust pie - I use this one. You can also skip the crust and bake the filling in a covered dish for a lighter version.

2. Put the filling ingredients together in a big bowl, toss until the apples are coated.

3. Put into the pie shell, top with the lid, seal the edges.

4. Poke holes in the top crust (I would not recommend cutting out a death’s head shape; it tends to put off the audience).

5. Bake for 45-50 minutes until it’s golden brown and the juice bubbles up through the holes in the crust.

Serve warm to friends of any height, sex, or level of handsomeness.
Let us know if you try this recipe. We'd love to hear from you. Happy baking!