She looked over the edge of the cracked, old wishing well.
It certainly didn't look magical... 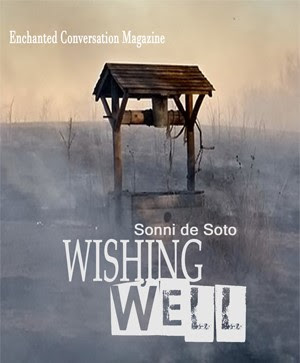 I wish I knew the good of wishing.
- Henry S. Leigh

Sweat dripped down Lily’s knees, pooling in the dampening lace of her socks, as she looked over the edge of the moss-covered, cracked, old wishing well. It certainly didn’t look magical. Nothing at all like the pretty, sparkling fairies in her picture books. Not even like the wizened, old gnomes her grandmother staggered about her front lawn.

The well looked dirty. Lily sniffed and crinkled her nose. And it smelled sour.

“Go ahead,” her father urged, holding her mother’s hand and smiling indulgently at Lily. “Close your eyes, make a wish, and the well will make it come true.” He gazed at his wife in her pretty Sunday clothes, her wide-brimmed hat wilting in the humid heat, and whispered against her cheek, “It did for me.” Her mother giggled.

Truth be told, she wished her father wouldn’t make her do this. She pouted and looked over the edge again, peering deeper into the dark. She thought that she could hear splashing down there, see shadows swimming about. She shivered and wondered what kind creature would live in such a dark, dank hole.

It would have a tail, she decided, and fins—scaly and razor-sharp. Its slick, slimy body would flick quick and impatient around the well’s rounded walls, waiting. But for what? she wondered. Was it trapped in the crumbling stone or just hiding, safe in the cool shelter of shadows, out of the grey-skied humidity that held her hostage in this heavy anticipation she begged would break?

Lily looked at the quarter her father gave her, lying flat and shiny with promise in her palm. Lily thought about the gumball she could buy with it. Thought about the handful of chocolates whose candy-coated shells would melt bright dots of color all over her hand in the sweltering heat.
“Having trouble thinking of a wish?” her mother asked her gently, coming to stand beside her, a hand soothing circles across Lily’s back. “Make one quick, then we’ll have lunch, okay?”
Lily wanted to go home. Wanted to leave this place. Now.
So screwing up her courage, she reached her hand shakily out over the old, ruined brick ledge. Holding her breath and squinting her eyes, she dangled the coin pinched between her fingers over the well.
Suddenly, she snatched it back, clutching the coin to her chest.
“What’s wrong, sweetheart?” her father asked.
She shook her head, not knowing what to say. She could hear it thrashing—that thing inside the well—could hear its excited pants. It had claws, she knew as she heard those sharp points scratch at stone. And teeth that chomped with impatient hunger. It was small—even smaller than Lily and she was just barely taller than her father’s hip—but it would eat her, gobble her up and spit out marrowless bones. She knew this unquestioningly, without quite knowing how she did.
Lily pouted, her lower lip stiff and stubborn. She didn’t like this place and couldn’t understand why her parents would bring her here. She wanted to go home. Right now. So thinking of the lunch—turkey or chicken salad, maybe even a cookie—that her mother would make, she shut her eyes and tossed the coin in.
In shiny, new dress shoes, wet and dirty from the dewy grass, Lily waited at the edge for her quarter’s splash. She inhaled sharply, holding her breath tightly as she strained to hear any sound coming from the well’s undisturbed water, but all she heard was the slippery slide of something swimming below.
She leaned in and listened, worrying her lip, but still heard nothing. She stepped back, her shoes squishing in the rain-soaked ground as she bit her nails nervously.
It had her coin.
It had her wish.
Lily tried hard not to imagine what the creature would do with it. Whether the thing would nibble it, gnaw at it, or just swallow it whole. Would her wish slide through the creature’s insides or sit sad in its belly forever?
“What did you wish for?” Her mother led Lily back to the car in the little parking lot between the park and the church.
Lily blinked up at her mother, her mind still worrying beside the well. “I,” she started with a frown, “didn’t wish for anything.” She shivered, despite the heat, as the grey skies darkened, hiding any trace of the summer sun, and the weight of the weather’s wait seemed to close in.
Unruffled, her father playfully mussed her hair, the way he did when she’d amused him. “That’s okay,” he told her as he lifted her up before buckling her in the backseat, the safety belt tight and scratchy under her chin. “You don’t have to tell us.”
As her father started the car with a quiet roar, Lily turned at a strange swishing sound coming from somewhere behind the car.
No, not behind the car. Beneath it.
Her gaze followed the sound as something scraped and sunk into the crunching metal. Her eyes widened as she heard it crawl and claw up the side of the car, its tail smacking against the side like a storm roiling in the distance.
Squirming against the seat belt as she watched fat raindrops strike her window, Lily wondered, when one wishes for nothing, what exactly do they get?

Sonni de Soto is a queer storyteller of color, who believes the best thing about speculative stories are their ability to, as G.K. Chesterton said, make the strange seem settled and the settled strange. de Soto has had the privilege of publishing novels and stories with Albedo One Magazine, Cleis Press, Stupid Fish Productions, and many others. An escape artist at heart, de Soto also enjoys consuming stories of all kinds and cosplaying the fictional loves of her life.  To find more from her, please visit amazon.com/author/sonnidesoto and sonnidesoto.blogspot.com. 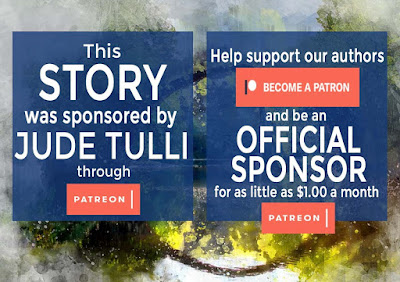