She’d once been beautiful.
The transition was slow,
like a shiny apple with a rotting core... 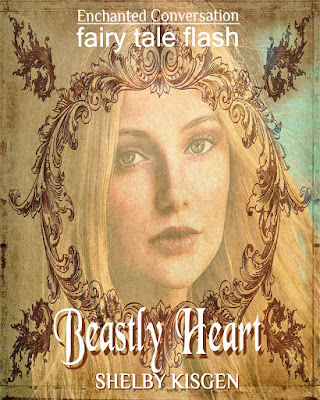 She’d once been beautiful. A charming child of giggles and grins, spoiled with praise for her cherubic face and doe-eyes.

Bathed in compliments and gifts, the girl morphed. The transition was slow but vicious, like a shiny apple with a rotting core.

One day, a witch approached the girl’s castle, requesting bread and a dry place to sleep. The girl laughed in her trilling alto before slamming the door. The thud of rejection echoed in the witch’s ears. With a raised staff, the witch cursed the girl with a body to match the reality of her heart.

The beautiful girl’s round face elongated into a distended jaw. Her wide eyes streaked with broken blood-vessels, stark and appalling on translucent skin. Her delicate hands rippled with protruding tendons, tufts of hair spurted from her pert nose, and her erect posture slumped as if a hill burst through her spine. She was beastly. Inside and out.

Only true-love’s kiss could break the curse and return her appealing outward appearance.

The ugly girl grew into an ugly woman as she waited for a loving man to take pity on her. To heal her with a kiss.

Then she waited some more. Waited for a man to see behind her ghastly face to the new-found beauty within. To the kindness and humility that only suffering and loneliness brings. The compassion learned by years as an outcast.

She might have waited forever, but one day, she looked in the mirror and gasped at the beautiful maiden blinking back at her.

Gone were her nostril hairs. Gone were her claws and blistered eyes. She was beautiful once again, an exact replica of herself before the witch’s curse.

But no man had kissed her. Beyond the initial horror and taunting, no man had deigned offer her a moment of his time. The curse was not broken.

But pain had made her heart lovely. And without a beastly heart, she had no beastly body.

Two days later, a man gaped as she strolled about the garden. She was polite, he was drooling, and before he parted, he dared to request a kiss.

Shelby Kisgen is a book publicist by day and writer by night. Her short story, "The Weight of Laughter", was published in Chicken Soup for the Soul: Curvy and Confident edition.
Follow her on Twitter @ShelbyKisgen
and Instagram: https://www.instagram.com/shelbykisgen/
Check out her website: https://shelbykisgen.com