The on-camera spokes-faerie radiated a sincerity,
and Gary had a need for a love potion... 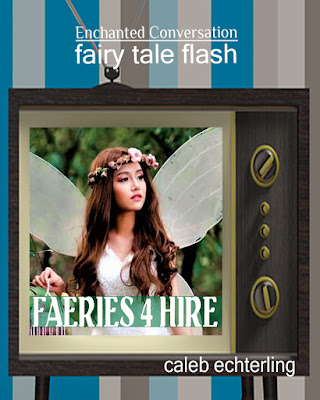 As a frequent consumer of 3:00 a.m. infomercials, Gary knew most services they pimped seemed a bit dodgy, as were, often, the infomercials themselves. But the Faeries 4 Hire advertisement stood out. The relative crispness of the production values gave the impression that no one was drunk or high during its planning and execution. And the on-camera spokes-faerie radiated a sincerity other wee-hours longform hucksters lacked.

Gary did have a pressing need for a love potion, and a dollar ninety-nine a minute wasn’t so outlandish, especially considering late capitalism’s inability to provide the marketplace with general purpose magicks.

The operator sounded as though she chain smoked potpourri blunts, and talked fast for someone with a financial incentive to stretch out the conversation, but Gary scribbled down the important bits.

“Teaspoon of unicorn tears, uh huh … three quarts of 10W30 motor oil, got it … seven crushed petals of a rose picked in fresh fallen snow … two black scales from the emo dragon of despair …  all mixed together in the pale glow of moonlight … I’m not sure where to find … oh, you sell everything required for the recipe … that would be a lot easier than … how much? … good Lord, that’s more than I make in a year.”

Gary sat cross-legged on his lawn. The ingredients for a love potion were piled into an upmarket blender between his legs. The waning crescent moon emerged from behind a cloud to cast its pale light onto his patch of earth, and Gary checked the faerie’s instructions one last time. He pushed the button for ‘Pulse’ and counted down from five. When the countdown struck zero, he switched the speed to ‘Liquefy’.

The next day, Gary sprang the concoction on the object of his desire. He hadn’t anticipated how much wrangling would be necessary to get them to drink viscous sludge from a 2 liter Mountain Dew bottle. An offer of currency, and a strong but false insinuation about the presence of a hidden camera crew for a revival of the Ashton Kutcher vehicle Punk’d, brought the bottle to their lips. Gary ended up wearing the entire potion, minus the one sip, first as a hat, then as an elegant shoulder accessory, and finally as a slick, sticky pullover.

Gary called Faeries 4 Hire to register his complaints. The operator had him recount, in detail, the potion preparation process. As he ticked off each step of the mixing, she added a curt “uh-huh” to the end of his sentences.

“There’s your problem,” she cut in. “Not moonlight. Moonlighting. With Bruce Willis and Cybill Shepherd. In order to blend properly, the potion needs exposure to TV dramedy with a ‘will they/won’t they’ trope. If you leave that out it’s basically motor oil, which faerie research shows has the same effect as an angry potion. You fucked up, dude.”