The bitter water had cast its spell,
and the sweet water was useless.
And so, I watched Psyche from afar... 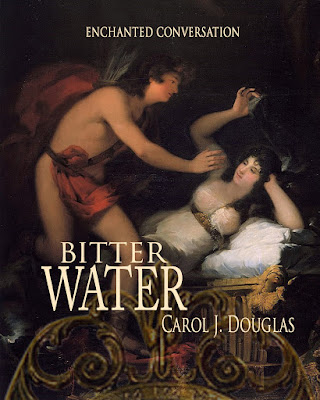 My knowledge of love is vast. In fact, my mother, Venus, is the Goddess of Love! As her son, Cupid, it has been my duty to shoot my arrows into unsuspecting mortals and gods and goddesses causing them to feel passion for another, sometimes returned, sometimes not. I find my job truly amusing, sometimes even hysterical, when I witness the trials passion can cause.

No matter if they are male or female, mortal or gods, they act the fool when it comes to the object of their desire. They chase their beloved and have no pride. It causes me great joy as I plan where to shoot my arrows. But alas, that was before it happened to me.

One day, my mother summoned me to her chambers. She was in a terrible rage.

“A maiden named Psyche is said to be even more beautiful than me! She is the youngest daughter of a king. I can see that she is being worshipped for her beauty instead of me!”
I spoke in a soothing voice, “What would you have me do mother? I will help in any way that I can.”

“You must go to my garden,” she said, “and draw bitter water from the well. Then you will sprinkle it on Psyche as she sleeps. The spell will cause her to fall out of favor, and no one will find her beautiful anymore.”

As I hastened to the well, I was happy that this task was fairly easy. I filled the jar with the bitter water and set off to find the maiden.
Entering her bedchamber, I saw that she was sleeping peacefully. Oh so carefully I lifted the jar over her and began pouring just a trickle so as not to arouse her. But suddenly her eyes opened. Her beauty startled me so that I jumped back causing one of my arrows to scratch my arm. It was the moment I fell hopelessly in love.

“Please," I begged, “do not be alarmed. I am Cupid, son of the goddess Venus. Remain here and I will fetch some sweet water to shower upon you. The harm of this bitter water will reverse.”
Off I flew, but though it was only a short while, the bitter water had cast its spell, and the sweet water was useless.
And so, I watched Psyche from afar. No longer did anyone think she was more desirable than my mother. Her parents became desperate to wed her since her two sisters had wed well. But no one would have her, and I knew my mother would never allow a match with me.
One day, her parents turned to Apollo. “Send her up the mountain. As she reaches the top, a monster of high birth will take her as his bride. He will take Psyche to his home to live.”
With heavy hearts and many tears they left her on top of the mountain. I watched as my beloved trembled in fear. Soon a breeze lifted her and carried her to a beautiful valley. To her astonishment, a stately palace stood before her.
She entered and found a feast set just for her. Though she was served delicious delicacies and rich wine, the hands were invisible that did the serving. Feet were unseen too although she could hear sound of slight footsteps.
Psyche explored the lush castle but found no one. Exhausted, she climbed into bed at midnight.

Just as her lids closed a voice forceful and loud said to her, “My wife, all that is here is yours. But you must never set your eyes upon me. If you do, great harm will come to you.”
Psyche remained at the castle for months. Everything she desired was given to her, but she did not see anyone, not even her husband. Growing terribly homesick, she asked permission to visit her family.

“You may go,” came the voice in reply,” but do not let your sisters or your mother and father convince you to try and gaze upon my face.”

Psyche agreed and left.
Telling her parents and sisters of the golden palace, invisible servants, and kind husband that she could not see, only made them speak badly of him.

“Ignore his instructions,” they cried, “He is a monster who will kill you as you sleep! Take a lantern and go into his bedchamber. But carry a knife lest he tries to harm you! See for yourself while he is sleeping.”
Psyche was finally convinced by her family to sneak into his bedchamber and look at him. So upon her return, Psyche crept into his bedchamber and held an oil lamp high. To her amazement, her eyes beheld a handsome youth! She gazed in rapture and fell in love. But too late, a drop of hot oil from the lamp dripped onto his shoulder, awakening him. He gazed into her eyes with great anger, and without a word, soared out the window and vanished.
Psyche wept. “I do not wish to live now,” she cried, and with that she ran out of the castle and down to the sea. Plunging in, she hoped to drown, but Neptune, god of the sea, would not let such a beautiful woman drown. He ordered the waters to carry her to the distant shore and deposit her on the far bank.
Still filled with deep sadness, Psyche wandered until she came to the temple of Venus. She entered and knelt before the altar.
“Oh beautiful goddess,” she cried. “I wish to serve you and ask forgiveness for any wrong I have done to you.”
But my mother still harbored jealousy as she gazed upon the beauty of Psyche. Her plan was to give Psyche three impossible tasks to complete.
“You will be loved again, but only if you complete three tasks for me,” said Venus.
“I will do anything,” cried Psyche.
“First, you must sort the grains in this temple into separate piles. You must finish by sunset.”
Psyche was dismayed to find that there were so many different kinds of grain, barley, wheat, peas, beans and others. When I saw Psyche’s tears knowing that her task was impossible to complete, I sent small black creatures to crawl about the floor and deposit each grain into separate piles.
When my mother returned and found the task completed, she knew someone had helped Psyche. Angrily, she gave her a second task.
“You must cross the stream where my golden fleeced sheep stay. Bring me three tufts of wool.”
At the edge of the stream, Psyche dipped her foot into the cool water. I spoke to her through the reeds waving in the wind. “The sheep will attack you with their horns in the daylight. Wait until nighttime and gather the wool from the bushes and trees where they have rubbed in their daytime wanderings.”
So she crossed the stream at night and gathered the wool tufts as instructed and presented them to Venus.
Again, my mother was angered. She believed the last task was impossible because whoever was helping her could not do so with this one. “The final task I give you is to go to the Underworld and persuade Queen Proserpine to give you a box of her magic ointment that keeps her eternally beautiful.”
I watched as my beloved stepped into Charon’s boat and was rowed across the inky black water of the river Styx. She somehow persuaded the queen to give her a box because I saw her step into the boat to return holding it. But much to my dismay, Psyche must have wondered what held the magic of eternal beauty. She pried open the lid while crossing the river and dark clouds came forth causing her to fall into a deep slumber from which she would not awake.
My heart shattered. She looked deathlike floating in a boat on the river of death. I flew to her and carried her to Jupiter pleading for his help. He called my mother to him and asked her to forgive Psyche and let me wed her. When my mother saw that I was in so much anguish and loved Psyche so, she relented. Psyche awoke in my arms, and we looked into each other’s eyes and declared our love.
The wedding was attended by all the gods, goddesses and mortals we love. My mother approached. “My gift to you is this,” she said as she sprinkled Psyche with sweet water. And though Psyche can now be seen by all for her extraordinary beauty, she is my wife forevermore.

Carol J. Douglas writes from her home in Dublin, Ohio. She enjoys writing in many genres. Most of her published works are in Romance, Nonfiction and Children's poetry and stories. She has been published in Chicken Soup for the Soul, Woman's World Magazine, and Guardian Angel Kids e-zine as well as in the December 2018 issue of Enchanted Conversation with a Flash Fairytale titled, “The Kiss.” Carol has always enjoyed Mythology and Classic Ancient Tales.