THE LIGHTHOUSE KEEPER AND THE HAG by Madison McSweeney

They say mermaids never grow old,
but that's a myth... 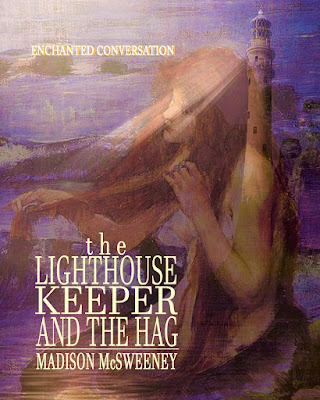 In her younger days, she had a voice like a golden harp strummed by a fairy queen; now, she screeches like a cat in heat.

The old man can hear her from his bedroom in tower of the lighthouse. Sometimes he turns on the fog horn to drown her out. Other times, he yells out the window: “Yowl all ye want, sea-woman – ye won’t lure this old sailor into the deep!”

The old man hasn’t been a sailor for a long time. He lost his sea legs years ago, and retired to a solitary life at the top of a tall tower on an outcropping of rock in the middle of the sea, shining the warning light lest a ship come by and crash into the jagged shore.

She was still young and beautiful when she first washed up on his beach. He was a younger man then, too, but knew well enough not to be fooled by her siren song. Granted, some nights he would find himself gazing out his window, watching her splayed out on the rocks, bathed in moonlight, clear water lapping up against the tip of her silver tail. Inevitably, she’d see him observing her, lock eyes with him, and start to croon some wordless lullaby from the bottom of the ocean. And inevitably, he’d feel himself drawn to her, compelled to run his rough hands up and down her pale flesh, convinced he would rather drown himself to be with her than deny himself another day. On those nights, whether there was a ship passing by or not, he would turn on the beacon and send her scurrying back into the sea.

The dance went on for five years before he finally approached her. She was sunning herself on the beach when she saw the top of his head over the edge of a cliff. She smiled and sat up straighter, throwing her long red hair over her shoulder so her whole body was on display for him. Smiling, she opened her mouth to sing. The man grunted, and something glinted in the sun; no later than the end of her first verse, a spear sailed through the air and pierced her glistening tail. The sea woman screamed and tried to pull the spear from her flesh, but its tip was firmly lodged between her scales. The more frenzied her attempts to free herself, the more damage she did. By the time she’d dislodged the weapon, she was paralyzed.

Thirty years she’s been trapped here. She’s long since lost her beauty, her voice, and her charm. All that’s left is a creature of rage and hunger and unfulfilled lust.

They say mermaids never grow old, but that’s a myth.

Or maybe they never truly do. Sometimes, when the sky is clear and the moon is full, the old man looks at her and can swear she looks exactly as she did when he first laid eyes on her. He hates her then, even more than he hates her as a hag. When she looks like that, she reminds him of the years lost, and the life he’ll never know again.

It’s the same reason he hates the ships that pass, and the men who sail them. The thought of the mariners, young and strong, their calloused hands and muscular arms hauling ropes and unfurling powerful sails, makes him feel even more acutely the arthritic ache in his own gnarled fingers.

When the ships pass by, he faithfully turns on the light for them. But on some of those nights, when the old man is in an especially black mood, he yearns to keep them in darkness and let them crash against the rocks.

The fog that crowds the rocks is thick and oppressive, but dissipates along the beach where the old man checks his fishing nets. It’s a small haul today, but enough to last him for a week or so.

As he drags the nets ashore, the hag yowls to be fed.

“Get yer own fish,” the lighthouse keeper snarls, but tosses her one anyway. She sinks her teeth into its flesh and eats it raw. He winces, straining to tune out the munchings and slurpings.

The hag finishes her meal and watches as he trudges away. “You did this to me,” she says, marking his contempt. He ignores her. “If I could swim, I’d be far away right now. You ruined me.

But you can still save me.”

“Save yerself, hag,” he mutters.

She lowers her voice, speaking as softly as her parched throat will allow. “If you would come to me, I would be made well again. Young again. And you could as well, old man. We can live forever in the deep.”

“Bugger off,” he replies, and walks into the mist.

Weeks pass. The sea is calm and the sky is clear.

The old man is sitting, watching the moonlight ripple over the furrows of the water. He doesn’t sleep much anymore.

Just before midnight, a ship appears from over the horizon and begins making its way towards the rocks. The man sighs, and wonders if it wouldn’t be so bad to let a ship navigate itself for once. At last, he extinguishes his pipe and stands. The springs of his chair screech as he rises; his muscles groan with exertion as he lumbers down the stairs. He is old, he knows – perhaps too old even for this.

The foghorn blares and the beacon flashes across the water. This is usually enough to correct a wayward captain; he leaves the light on but lets the horn go silent.

As he watches the sea, the Lighthouse Keeper becomes increasingly puzzled. The boat is not changing course. He shouts at the vessel, his voice overpowered by the roaring of the sea. And this is when he sees the sea-woman, perched atop one of the jagged rocks, her body obscured in shadow. Faintly, over the noise of the lapping waves, he can hear her singing.

“Do they still warn the youths against the songs of the sirens?” he muses to himself. “Or have today’s seamen outgrown the superstitions of old?”

Surely, they’ll change course, he thinks. Someone will see to it. Even at the height of her powers, a siren could never transfix an entire crew. He sets off the foghorn again, momentarily drowning out the song. The crew snaps from their spell, but it’s too late – they’ve already drifted into rough waters. The ship lurches to a halt as the hull wedges itself between two massive rocks.

The lighthouse keeper smiles slightly in spite of himself. The ship is stuck, not damaged, and he can’t help being amused at the thought of the chaos breaking out on the decks.

For what? For being young?

For being foolish, he replies, more to comfort himself than anything. For he knows he cannot stop this man from plunging to his death. Even if he could, his tired legs will not carry him to the shore quickly enough.

As quickly as he accepts that rationale, he moves to defy it.

The sailor could have jumped a thousand times in the time it takes the old man to drag himself down the stairs and limp to the foot of the tower; however, when he emerges, the sailor is still standing on the ledge – with both feet now, but firmly planted. Motionless, watching the siren sing.

The Lighthouse Keeper can hear it now. The hag is singing her sweetest song, and in the harsh light she looks as lovely as she did in the peak of youth.

“Stop!”  The old man shouts, but the youth does not heed him. The sea-woman flicks her head ever so briefly towards the beach, flipping her hair and locking eyes with the Lighthouse Keeper.

She rejects him, turns again, and continues to croon to the sailor.

There’s something about the way a siren sings. In reality, her voice is no louder than the roar of the waves crashing against the hull, but when it reaches your ear, it sounds like it comes from all the ocean. The wind around you begins to feel strangely oppressive, and above you the whole sky seems to shimmer.

If you listen and watch them long enough (for the listening and the watching go hand-in-hand), it will start to feel like you’re staring through a mist, and the woman is the only thing visible at the other end. Once you reach that point, it’s only a moment before the siren is the only thing at all. The past seems distant, irrelevant, and your future seems non-existent without her in it. The only option, then, seems to be to hurl yourself into the sea.

The lad must be feeling that way now. Even the Lighthouse Keeper is beginning to feel stirrings of it, and he’s been long immune to her charms.

The old man cries out again, hoping that some miracle will send his voice across the water. But no one hears. The youth bends his knees, preparing to jump. He’s under her spell now, and there is no breaking it. On the rocks, the beautiful hag smiles, tensing her body to pounce. She’ll have her man tonight.

Frantic, the Lighthouse Keeper dashes across the sand.

For the old man, there is no sound save the smacking of his bare feet against the sand. Time seems to have stopped.“This is what you really want, sea-woman!” he howls, and runs headlong into the cold water.

The woman meets his eyes.

She smiles at him, and to his surprise, there’s no malevolence in that smile – just lust, unsullied by any of the old hate. The man’s mind is whirling, and it occurs to him that she has waited thirty years for him – and he, for her.

He wades further into the water, and is soon up to his knees, his hips. When the water is at chest-level, the woman dives off her rock and emerges to embrace him.

The woman is radiant, all the hopes and mysteries of the sea personified. Her fingers linger lovingly on his flesh, and he opens his mouth in ecstasy. For a moment, as the sea woman pulls him under, the old man feels very, very young.

He feels his throat fill with seawater as his body is submerged. Around his waist, her fingernails sharpen into talons, and at his throat, her lips curl to reveal her fangs. The Lighthouse Keeper gurgles a soundless scream, and the water that caresses his flesh turns red.

Madison McSweeney is a Canadian author and poet, working mainly in the horror, fantasy, and science fiction genres. Her fiction and poetry has appeared in outlets such as American Gothic, Under the Full Moon's Light, Rhythm & Bones Lit, and Zombie Punks F*ck Off. She lives in Ottawa with her family and her cat, and frequently blogs about genre fiction and the Canadian arts scene.
Website: www.madisonmcsweeney.com
Twitter: @MMcSw13
Instagram: madison.mcsweeney13