"If you aren't human, it will be harder
for you. I think you are an elemental?"
"I am wind and cloud..." 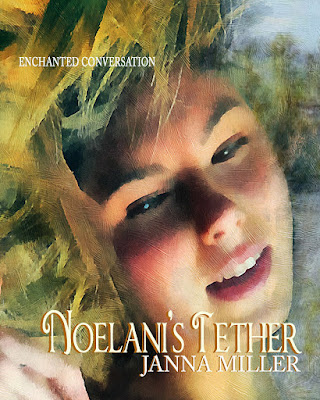 The North Wind’s daughters routinely tumbled like flower petals over grass and down short hills when their father was angry or had a cold. At least half water vapor from their cloud nymph mother, they trailed long tangled hair and moist laughter with them as they went, clutching at grass or the delicate roots of spiky air plants and hardy orchids. Then they would link long willowy fingers and pull together against the gale, until their father blew himself out and took a nap in the garden hammock, snoring small storms into the North Sea.

As they grew, all but one sister acquired less substance, and tended to levitate over weather patterns that surrounded their house. They would bask in the sun, circling in lazy air currents while their mother read them stories or taught them the rules of Science. Noelani, the youngest, was the only one that stayed mostly grounded and needed a rope tied around her waist to hoist her up into the sky with her sisters, balancing like a teacup on their knees.

One cold day when the snow made it impossible to land, the girls asked their father for a trip to warmer weather. He kissed their icy foreheads and blew them gently toward the South, to thaw in balmy skies. Almost to their destination, storm clouds rose up before them, darkening the afternoon blue. Noelani gripped the rope that tied her to her sisters.

Audra cast a worried look between her youngest sibling and the storm ahead. “We will have to try to rise above it, since we are still within Father’s wind.”

Immediately, four of the sisters rose to the safety of the upper atmosphere, where the air was thin enough to collect stardust. Audra and Thora gripped Noelani’s rope and struggled to ascend as well, while she hung tied below them, swinging in the conflicting wind of the nearing storm. Worse, the tingle of ozone signaled that this storm was Wild Science and would have no nymph to appeal to. They strained and pulled against her weight, letting the rope slip further from sweaty fingers. Noelani looked up to see panicky eyes reflected in the light of gathering lightning charges. They struggled and grunted and entered the storm, where she almost immediately fell from wispy hands, dropping into buffeted darkness.


Noelani fell until she landed in a tossing ocean. Riding up mountainous crests of water, she bobbed as an unsinkable ship, tumbling end over end like when she was younger in her father’s gusts. She could not sink, but could not rise either. She realized that this was what her mother had called Gravity, and it pinned her to the earth as surely as a boulder dropped from a mountaintop.
Eventually, the water calmed and the storm ended. Noelani looked desperately for her sisters’ forms against the sky, but saw nothing. She thought about how big the world was and how she was as small as a flower petal in an endless field of roses. She bobbed and floated, watching the shadows of enormous creatures beneath her feet until the ground came up to meet her with silver, darting fish. When green trees appeared on the horizon, she propelled herself toward them with the little bit of wind she possessed. Nearly within reach of a low branch, she threw her rope over the trunk and hauled herself up into it.


She slept in the crook of the tree that night and the next until hunger forced her to climb into dense foliage of the ground. The forest floor vibrated with activity that she later found out were lizards and small flightless birds. Heavy stems of bananas dipped within her easy reach. She found a stream and followed it up to a rock clearing at the base of a mountain, where a figure with grey skin perched on a blackened outcrop.

“Stranded here, are you?” His voice was dry and raspy, yet she could feel its rumble in her feet.

“Not permanently. It will take some time for my sisters to find me, but I know they will.”

“If you aren’t human, it will be harder for you. I think you are elemental?”

He relaxed his fists and his red eyes cast downward. “Welcome to Earth, formerly of Gaia. My name is Azar.  I was born under the ocean, in the belly of fire. I am sorry that you found your way here.” She could see that his skin was mostly rough and cracked, like a coating of mud from a long dry river. He pulled at the base of his throat that showed the line between marked and unmarked flesh.

Azar showed Noelani where there was more than just bananas, where the pool with the sweetest water lay hidden in a rocky cave, where the hot springs were for bathing, and where she could sleep soundly, under his protective, watchful eyes. He also showed her the path to the top of the mountain, so she could look for her sisters. That first day, there was nothing but empty blue sky and empty blue ocean, as still as a breath not taken. So she gave her breath to the sky in a long stream of smoke, building her own storm.

Then they hiked black sand beaches and searched through forests for flowers that opened only with the coaxing rays of the setting sun. When they were thirsty, Noelani directed moisture from the air into the tail of the rope that she still wore around her waist, squeezing out drops into their dry mouths. Sometimes this made Azar’s eyes flash a deeper red, like there was something had had lost. Azar was quick to anger, but also quick to cool. This she also knew from her father.

Noelani couldn’t help but think that even with noises in the underbrush and the shrill calls of birds, that the island was strangely quiet. Nothing floated, and the small breezes were static, smelling not of where they had been or where they were going. The black beach that glittered did not reflect, the flower that opened at sunset was orange and beautiful, but cold.

“Why is this island so empty? Why is it so still?”

In answer, Azar brought her to the cave where the hot springs were and lay her hand on a warm rock. When he placed his hand on hers, she felt something beneath the surface, like a long, slow heartbeat. The rumble in his voice returned, sending vibrations to the ends of her hair.

“Her blood is close to the surface here.” The veins in his own hand had a faint red glow and started to pulse in the dim light, as did his eyes, which smoldered like embers. His grey skin flaked and cracked more deeply, bringing a dry heat to the small space. When he looked at her, she saw the Volcano inside.

In a moment, he faded, and the heartbeat stopped. His skin rejoined. His eyes cooled and extinguished.

Stepping into the air outside the cave, his grey skin traveled higher, tracing a line up to just under his ears. “The ships from the horizon plot their courses with metal gauges and magnetic north. They do not use the stars, they do not use the wind. The humans have driven my mother deep, and she cannot find me.”

Noelani’s cloud grew above the mountain, until she spawned tiny lightning babies, nipping at the toes of one another. They fought and bit in playful sparks and chased each other in muted flashes. She looked on fondly as she plaited grasses together that grew near the top, one long strand after another.

It took some time for her sisters to find her, drawn to her perfectly brewing storm, which was the only thing in the sterile sky. They descended in a rush, covering her with wet kisses that left her damp. She laughed as they fussed and hugged them until they started to dissolve.

Just before Audra and Thora pulled her up by her rope, Noelani grabbed something from under a bush and called for Azar. He shyly poked out from behind some branches.

“This is for you, Azar.” She tied a rope she had made from the top of his mountain around his waist and handed it to her four other sisters.

“He is dying in this land. We must take him North to where he can feel his Mother’s blood.”

“I can’t leave my Island, this is my body too.”

“I have seen the spark inside you. We will find you a place where you can burn again.”

The other four sisters struggled, but pulled him aloft. Audra uncorked a bottle of Father’s wind and blew them, cloud and all, to the North. When the ocean churned and turned grey, next to deeply fissured land that was rock and ice, they corked the bottle again. Noelani spotted steam, and the sisters landed at the edge of a chasm. Azar’s skin cracked red and raw. His eyes started to burn.

Glowing, he thanked the sisters and tried to hug Noelani, but he was now too hot to touch. They lowered him into the fissure just before the rope caught fire. He curled himself in a hollow and slept.

When they returned home, her father sang to her by blowing through tree roots and branches. Her sisters threw her from cloud to cloud, catching her with soft embraces. Her mother tucked her into a bed in the sky, setting her storm free to play. She tried to untie the rope from her waist, but it was stuck fast.

Though at first it bothered her, Noelani found her tether a useful extension. Instead of letting her sisters pull her into the sky, she would lasso her cloud and pull herself up to join them. Later, she used it to lower herself into fissures to visit sleeping friends and to reach others dying in sterile lands. It no longer pulled her along, but connected her to a larger place. And when her father would sneeze after blowing down iron foundries and metal yards, she dug in deep against the wind, holding herself to the world.

Janna Miller has been working in libraries since she was 16 and finds that this setting often makes its way into her stories, being the nexus of stories themselves. She writes mostly lyrical fantasy, science-fiction and dark fairy-tales. She is currently working on book of eco science-fiction and interconnectivity with some other various drips and drops.  She loves to be with her family, explore unusual crafts, and read.


Her blog can be found here: http://millersminusculemystories.com/blog/