THE GHOSTBERRY BUSH by Allyson Shaw

Her mother was buried beneath the
ghostberry bush, so her ghost would have
the white berries to eat as it wandered... 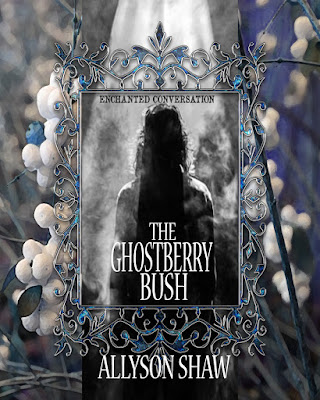 There is a fine bush that grows in the village by the sea, where I spent my childhood. The houses are all tucked up neatly in a row with the black net huts still there, but empty now that the remaining houses are holiday cottages. The shrub is called the ice apple, but sometimes it is also called the corpse or ghostberry, and it comes from someplace else but was hardy enough to survive the terrible winds and cold salt air of the North Sea. It is poison to the living, but its berries are food for the dead.

Walking past that bush in winter, my old auntie would tell me a story of a fisherman and his daughter who lived in the village long ago, when most of the fishermen living there had been cleared away from their homes in the Highlands.  “They had to learn to fish,” she said, “though they were farmers. It was a hard life, fishing on the North Sea when all you knew was how to grow things.

“There was a fisherman that planted that bush. He put it in the ground when he was married, for he had a fine woman who kept a tidy house and he was good at planting things. The first thing the new wife did was sew a shroud from her one white dress, as all good women did once wed. Soon the wife was with child, but babe killed her mother with her birthing, as babes sometimes do, without meaning to. Her mother’s body was buried in the shroud she had made. She lay beneath the berry bush so that her ghost would always have the meat of its white berries in winter to eat as it wandered.

“The girl lived with her father in the little cottage without a woman to put it to order. Cobwebs took over the corners and it stank of rotting fish. No one knew how the girl survived without a mother to nurse her, but she did. As soon as she could stand her father had her doing all the womanly things of the house. Small as she was, they got done. At night the girl would sit beside the berry bush and tell her mother of her day, and her mother would tell her everything she knew. The daughter could see her mother, pale as the white berries her ghost ate, her eyes shining like two black stones.

“Soon the father remarried a widow from the next parish and the girl got another mother. This new mother wanted to cut down the berry bush, thinking it ugly.

“'Get me the axe, little woman,’ the new mother said to the girl while the father was out on his boat getting in the mackerel. ‘We will put an end to this unlucky thing once and for all.’  Just like that, she chopped the bush down. She was a strong woman, good with an axe.

“‘Where is our own little daughter, Husband?’ the new mother would ask when he came back from the sea, showing him her fine round calves that he loved. She wanted more than anything to have her own child by the fisherman.
“The father sat repairing his nets by the fire. There was his first wife at the window, pale as the white berries she ate, hunched with birth pangs, wandering, her eyes shining like two black stones. She whispered against the glass,  “Where is the berry bush, husband?” He shook his head and scratched at the buzzing in his ears.

“One day while the father was out getting the herring, the new mother said to the girl, ‘Why grieve for your mother when you have me?’ The girl was crying, looking at the stump of the bush, worried her mother would come no more. The new mother bid her lay her head in her lap so that she could comb her hair. The girl did as she was told and the new mother smoothed her hair and then wrapped her hands about the tiny neck and held it so tightly that the girl turned blue and died, for she was a strong woman and good with her hands. The new mother cooked her up in a stew for the father to eat when he came home from the sea. It simmered for a day and then some and she seasoned it well. She took all the bones that didn’t go into the pot and buried them out by the old stump of the berry bush.

“At night the storm raged and the girl’s mother, pale as the white berries she ate, wandered, her eyes shining like two black stones searching for her daughter.  The man came home but was so exhausted from riding his boat over the great waves of the storm, that he didn’t notice that overnight the berry bush had grown back, taller and fatter than before, and in it sat a nightjar, calling to him with its low, churring song.

“He ate the stew that bubbled in the great pot on the hearth. It was so delicious, he held out his bowl for more. ‘Meat for dinner! Wife, you are clever,’ he exclaimed. The storm raged. Lightning lit up the cottage.

“‘A man can’t live on fish alone.’ She filled his bowl full and smiled as thunder shuddered outside. Then he threw his clothes down at the foot of the bed, stinking of fish and sweat, and collapsed into sleep.

“The new wife tossed in the bed beside him and moaned. The wild rain was loud at the window. They heard the nightjar thurring in the berry bush outside. The father sat up at once when he heard it talk. It had the voice of his little girl. “Where is your daughter, father?” it asked.
“He dragged the new wife outside in her night dress, and he without a stitch on. They stood in front of the flowering bush, in awe. The first woman unwound herself before them, pale and smeared with grave dirt from her shroud, sewn from her wedding dress. It fell from her shoulders where the little nightjar perched singing.

“The rain lashed and blinded them as the father took his new wife to his boat moored there at the shore. He dragged it out to sea where the storm saw fit to drown them.”

Even now, if you walk down the path by the wreck of the old dock, you can see it.  Nothing is left of the cottage, but the ghostberry has seeded and grows in abundance. The mother’s ghost has long passed over, but the nightjar winters here and on the darkest nights you can hear it singing.

Allyson Shaw lives on the north east coast of Scotland with a man and three cats. She is a poet by vocation and a metalsmith by trade. You can read more of her work as well as her field notes from witches monuments throughout Scotland at her Patreon.
Check out her links:
http://www.patreon.com/Allysonshaw
http://www.instagram.com/groasgala
http://www.allysonshaw.com