THE PEASANT, THE PEA, AND THE GHOST by Carol Scheina

"It's not real," she whispered.
"I am real," the ghostly voice whispered back... 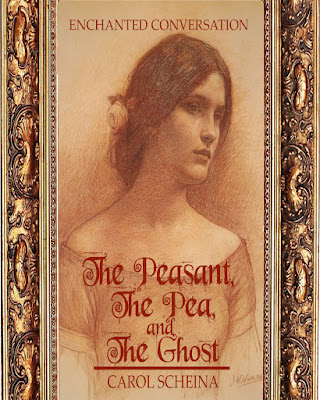 The hallucinations began on the 16th night.


From her resting place 20 mattresses high, Tania felt herself rolling closer and closer to the point where softness ended and empty air began. Her body was teetering on the edge of an abyss, she was falling to the cold, marble floor, her chest flattening with the impact, her last breath rushing out…

Tania jerked up, safe in the middle of the bed, high on her tower of mattresses.

“I am real,” the ghostly voice whispered back, as it had for the past 15 nights. “You will never be a princess. Roll out of the bed. Do it now. End this.”

Tania closed her eyes and pulled a pillow over her ears. “Not real,” she continued to whisper, even as the voice repeated its refrain all night long. The pillow failed to muffle the sound.

The next morning, as servants poured tea and spread a napkin over her lap, Tania focused on sitting straight and proper.

The duchess sipped her gold-rimmed cup with the grace of experience and asked, “Did you get a good night’s sleep?”

The duchess smiled and nodded knowingly, “The pea.”

Tania tried to drink so as to avoid answering, but her hand shook as she lifted her teacup, the fragile china rattling on its plate and sending echoes to the high ceilings. She quickly lowered the cup, and her eyes blinked back the blur of exhaustion. Glancing through her lashes, Tania could see the duchess frowning. They’d had too many lessons for such a mistake.

In the span of 30 days, Tania had to learn to be a proper princess under the tutelage of the duchess. How to properly twirl when dancing a reel and how to curtsy at the end. How to lift a teacup like a true princess, and other such lessons of royalty.

“A princess must be sensitive to all in the world around her,” the duchess liked to proclaim with a dramatic wave of her hand. The high tower of mattress Tania slept upon had a single, hard pea at the bottom, and hopefully she would learn to sense the microscopic bump, thus proving she had gained a princess’s sensitivity.

No one had mentioned a voice, and Tania didn’t want to say anything. She suspected the duchess had no idea a spirit haunted her estate, and if Tania did say something, would the duchess think her insane?

For just one moment, Tania wondered if all this was worth it, for the truth was, she couldn’t even feel the dang pea beneath the pile of mattresses. She was just a stable girl, a peasant, who longed for the scents of horse and hay.

Then she thought of the prince and their love. The king and queen had agreed to the match if Tania could learn the ways of royal life, and she was not inclined to fail.

Tania inhaled deeply and lifted the teacup once more. This time, there was no rattle as she steadily brought the gold rim to her lips.

After a full day of lessons, Tania climbed the ladder up the tower of mattresses for the 17th night and wondered if the voice would return. In her exhaustion, she nearly slipped and fell off near the top, afterward pausing in her climb to allow her racing heart to calm somewhat. She continued on and secured herself in the center of the top mattress.

Servants removed the ladder and blew the lamps out to darkness, and there was a moment of rustling as they left the room.

“Roll out,” the ghostly voice whispered.

This time, Tania felt cold hands on her back. She brushed the air frantically, feeling nothing.

“You will never be a princess.”

The voice deepened. “You will fail.”

Tania felt the cold hands press harder. “No,” she sobbed.

The night passed once more with no rest.

As the sunrise brought bright reflections to the marble surrounding her, Tania felt stronger with the new day. She would see the prince again at the end of all this.

That night, she smuggled a silver knife into the bed.

“Do you really think that will stop me?” the voice sneered.

Tania blinked, realizing she had, indeed, wanted to fight a bodiless voice. “Let me see you. Come out, fight me.”

“I fight you the only way I can. You will never be a princess.”

“I care not if my life be as princess or peasant. I care only that I love him, and he has given me his love in return.” Tania stabbed the air fiercely.

“Fawn love,” the voice was dismissive. “He feels drawn to your beauty, your lovely locks and moist lips. You bat large eyes at each other and moan of love. But the slightest action will startle him, and he’ll bound away in another direction.” The voice grew harsh. “You must roll out. End this now.”

Tania lowered the knife. Exhaustion turned her thoughts in strange directions, replaying the words over and over. End this now. Then her mind thought of the prince, and her heart beat stronger than exhaustion. “It’s not fawn love,” she shot back. “He loves me not for my looks but for who I am.”

The voice made a dismissive sound.

“Love goes beyond what we see with our eyes,” Tania continued, lifting her long braid. It was her one real beauty, as the duchess often said after all the hay had been washed out. “Do you not understand such a bond between two people? Our love is more than just hair and lips. The prince loves me no matter how I look.”

The knife raised once more, and with a quick motion, Tania sliced her long braid off. She threw the locks off the side then carefully peeked over, watching lines of hair scatter on the marble floor far below. Perhaps the voice would be satisfied with such an offering.

The voice was silent, as though uncertain how to respond to the shorn braid, and it did not speak again that night. Tania slept deeply despite the strangeness of not having a braid press against her neck.

“You want his wealth,” the voice accused her the next night.

Tania shook her head. “I care not for his wealth. He could be a peasant like me and I would love him just the same.”

The voice made a snorting sound.

Tania fingered the large diamond ring on her left hand, which the prince had slipped in place when he asked her to wed him. It had not left her hand since. “I don’t need wealth from him. Love goes beyond all the gold and silver we could ever hold.”

Slowly, Tania twisted the ring off her finger and tossed it over the side of the bed, hearing the faint clink as it struck the marble floor and rolled to some unknown corner of the room.

The voice was silent the rest of the night.

The voice spoke sharply when night fell next. “You wish for his power to rule the country. Would you kill him to become a queen some day?”

“I would give my life for his.” Tania said. “I would jump off this bed. Love goes beyond the border of life and death.”

The voice laughed, cold and bitter, but did not speak again that night.

In the quiet of the next night, the voice startled her by asking, “How did you meet?”

“Why do you wish to know?” Tania was suspicious, wondering if this would be a new way for the voice to torment her.

Tania nestled her head into the pillow and began to recount her tale, how she encountered the prince frequently in the stables, where she had worked for the past three years. The prince had taken to long rides through the woods following his fiancé’s death. The princess had died unexpectedly after a brief illness, and Tania knew how deeply the loss affected the prince as she rubbed the white stain of salt-tears off the saddle and reins. They had loved each other deeply.

His gentleness first caught her attention when he kept a wounded horse calm as she treated the injury and slipped a peppermint to the horse. Every visit afterward, he brought peppermints for all the horses. Their encounters began to include more words and smiles, and then she suddenly realized it had been ages since she last scrubbed salt-tear stains off the saddle. Not a single mark. When he kissed her, she realized a mark had been made, indeed, though this time on her heart, and she had no desire to rub it away.

“He left a mark on my heart as well,” the voice said. And in that moment, Tania saw the outline of a young woman lying in the bed next to her.

Tania didn’t move, though her heart beat a rhythm of fear. The princess, she knew.

The ghost continued. “We were supposed to have a happily ever after. I didn’t want to ever leave him. You said love goes beyond the border of life and death, but it doesn’t. He’s forgotten me.”

Tania breathed deeply and thought a moment before responding. “I think there’s a mark in his heart that will always be for you. I saw his pain at your death. He was utterly lost, and that kind of grief never leaves. Even if you’re not there with him, love goes beyond what we see.” The tearstained saddle came to Tania’s mind. The prince had loved the princess deeply, and Tania felt a stirring of sympathy in her heart for the ghost. “You will always be his first love, and I his second. I will make sure you are not forgotten.”

The princess looked startled. “Why would you do that?”

“To be kind to you.” Tania looked straight at the ghost that had tormented her for so many nights.

The ghost on the bed sat up, and in the dim light, a shine to her eyes reflected a deep, unspoken emotion. “A princess is not measured by dances or curtsies or proper teacup use. No pea beneath 20 mattresses can determine a princess. I have not acted as a princess in my afterlife,” the ghost bowed her head. “But you… My love chose well, it seems.” She slowly faded with a whisper, “Sleep well tonight.”

In the silence that followed, Tania realized that for the first time, she truly felt like a princess. “Thank you,” she whispered back.

The voice did not return again for the remainder of Tania’s nights upon the mattresses.

As the newly wed wife of the prince, Tania commissioned a painting, so they would never forget the princess who had been taken from them too soon.

The night the painting was unveiled, Tania found a hard pea upon her pillow. She held it closely and smiled.

Carol Scheina writes and edits as a freelancer. In free moments, she dreams up strange stories while trying to keep the cat from jumping on the keyboard and messing everything up. She has been published in the Winter 2018 edition of Enchanted Conversations. Her work can be found at https://carolscheina.wordpress.com/.