ALL HALLOW'S READ - Stingy Jack: The Man Who Stole the Devil's Wallet by zteve t. evans

This All Hallow's Read is a re-telling of an Irish folktale by author, zteve t. evans, of the infamous, Stingy Jack, (also known as Jack the Smith, Flaky Jack, or Jack of the Lantern)- a character associated with Halloween. The pumpkin jack-o-lantern may have derived from this colorful character and his interaction with the Prince of Darkness. 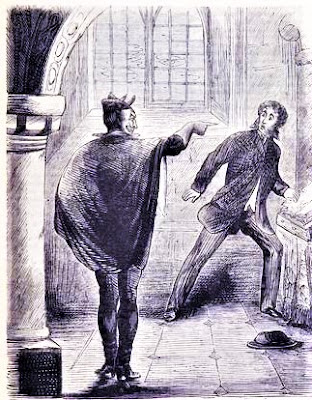 Way back in old Ireland several centuries ago, there was a well known character in many towns and villages across the country known as Stingy Jack. He had a silver tongue and could be very persuasive and charming yet was unquestionably a drunkard, trickster, blaggard and a man of all round devious character.

According to legend, the Devil heard all about Jack’s tricks and deviousness and decided to see if he lived up to his evil reputation. It also has to be said, although he would never admit it, that he may have been more than a little envious of his notoriety. Maybe he thought Jack was getting too big for his boots and stealing his thunder, but anyway he decided it was time he paid him a visit, intending to carry him back to Hell.

When he arrived at Jack’s door on a Saturday night, Jack was out in the bars and pubs boozing and carousing with anyone and everyone.  Eventually, deeply inebriated and skint, he staggered homewards. After knocking on Jack’s front door several times the Devil realized it was Saturday night and Jack would surely be out on the town. He knocked one last time just in case, and as he did so, he heard someone stumbling up the garden path. As Jack staggered up the path, he suddenly became aware of a dark figure knocking loudly upon his door.

“Hey! Who is that a-knocking on my door at this time of night when I am not in?” he drunkenly inquired.  The dark figure slowly turned and looked at Jack square in the face. Despite his drunkenness, Jack knew it was the Devil, and he had come to take him back to Hell.

“Well now, seeing as my time is up would you oblige me with one last request?” he asked.

The Devil, who was in no hurry, asked him what the request was.

“Well now, I would rather like a drink of good ale before I go,” replied Jack.

This seemed reasonable and perfectly harmless, so the Devil agreed, and Jack led him to a nearby inn. The Devil was still not in any hurry and allowed Jack to drink many jars of good ale. After Jack had drank his fill, the Devil was surprised when Jack told him it was time for him to pay the bill.

The Devil was a little taken aback. Nevertheless, he put his in hand in his pocket for his wallet that issues a never ending supply of money, but had a shock. His wallet was well and truly gone.

“Jack!” exclaimed the Devil in panic, “My wallet has gone!”

He was feeling mighty embarrassed and wished the floor would open up and swallow him. People were staring, and he looked at Jack for help, but Jack was looking the other way and nonchalantly whistling.

“Er, Jack,” said the Devil grinning nervously, “Could you, er, you know, see your way to help me out, please?”

“Well now, it so happens I have an idea,” replied Jack amicably.

“I would be most grateful!” replied the Devil.

As quick as a flash, Jack took up the coin and placed it in his pocket. As he did so, the Devil was shocked to see his missing wallet as Jack deftly took it out. Almost unbelievably, it happened that Jack, of all people, kept a small silver crucifix in that pocket. Small though it was, it had sufficient power to prevent the Devil returning to his true form. Jack quickly paid the landlord from the Devil’s wallet and with the Evil One now trapped in his pocket, left the pub for home.

To his bemusement and irritation the Devil now found himself trapped in coin form. Once again, he found himself agreeing to another demand from Jack who proposed that if he should not come for his soul for ten years, then he would remove the crucifix, allowing him to return to his true shape. With more than a sneaking admiration for Jack’s deviousness, the Devil agreed, but silently vowed revenge.

“That was a dirty trick, Jack!” said the Devil indignantly, “Now, my wallet please.”

“Why thank you sir, I am glad I impressed you!” replied Jack handing the Devil his wallet and grinning.

Ten years passed and once again, as Jack staggered down the path to his front door after a night on the town, the Devil appeared to him. Jack told him he had not forgotten and seemed to be prepared to accompany him, but then suddenly begged a favor.

“Well now," said Jack, “Before we go, could you see yourself providing me with a single apple to ease my hunger, if you please? You can see I am not in a fit state to go climbing trees,” he said pointing at his apple tree.

Foolishly, the Devil agreed and looking up saw an apple right at the top of the tree. Naively, he climbed up to bring it down. Seizing his chance Jack quickly laid a ring of crucifixes made from twigs around the bottom of the tree trunk containing the Devil to the tree.

The Devil was angry with Jack and even angrier he had been taken in. Indignantly, he demanded his release. However, Jack proposed that he would remove the crucifixes on the condition that he, the Devil, should never allow his soul to enter into Hell. Muttering dire curses under his breath, the Devil was forced to agree. Climbing down, he quickly checked for his wallet and found it gone.

“Well now, sir,” said Jack, “It fell out of your pocket while you were climbing the tree, and I caught it for you.  No need to thank me!”

Snatching his wallet from Jack, the Devil quickly returned to Hell determined to have no more to do with the devious and untrustworthy Stingy Jack.

Maybe you might have expected Jack to change his ways, but he never did. He carried on drinking and cheating, but one day his body could not take the strain of such a debauched lifestyle any longer.  His soul went up to the Pearly Gates, but as he was about to enter Saint Peter stopped him. Sternly, he told him he could not enter because God had been watching and knew all about his drunken life and sinful ways. Therefore Jack went down to the Gates of the Underworld begging entry into Hell.

The Devil, with an amused look on his evil face, reminded him of his pact that he could never allow his soul to enter Hell. He gave Jack an ember which signified that he was now a dweller of the netherworld. That is why Jack must roam between the realms of good and evil until Judgement Day, carrying an ember from Hell which he carries in a hollowed out turnip. This acts to warn others of his approach and to light his way in the netherworld. However, as Jack wandered off, the Devil put his hand in his pocket and was aghast to find his wallet was gone, but he could not enter the netherworld to retrieve it.

Now you might think Jack was happy to have the Devil’s wallet with its never ending supply of money, but you see, there are no pubs and bars in the netherworld and nothing to spend all that money on, and that really broke Jack’s heart!

In April 2013, zteve launched his first blog that focused on legends, myths and folktales from around the world at Under the influence!. This has has grown steadily receiving visitors from 200 countries around the world so far. He has published a Kindle ebook, Havelock the Dane:Hero-King of Two Realms and has contributed  articles to the #FolkloreThursday website regularly since its launch and haunts Twitter here, @ztevetevans