ALL HALLOW'S READ - No Dreams of Dragons by Abby Polakow

She was always making the candy,
spinning it from her multitudes of memories... 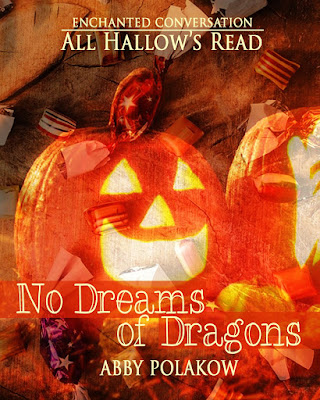 It seems strange, but her favorite thing in the modern world was Halloween. On July 5th, when many shops began to fill their windows with skulls and pumpkins, she cheered, while others groaned and rolled their eyes. She liked having those extra months to prepare, to get all the decorations quite right, so that the children would be sure to visit her house trick-or-treating. After all, it was generally regarded as suspicious to hand out candy to random children any other day of the year. And suspicion was dreadfully painful to her, out of her own body (except for the horn,) and out of her own time as she was.
The candy, now, that was another matter entirely. She was always making the candy, spinning it from her multitudes of memories, flavoring it as no one else could, with her love. Hers was the kind of love that cannot even imagine judging another, would never dream of being owed anything, and would always be as plentiful for her as for those she bestowed it upon.
“Don’t see why you bother,” sniffed the dragon. He watched the first cluster of trick-or-treaters depart into the gathering dusk, having received their allotment of enchanted sweets for that year. She tucked an extra pillow behind him in his wheelchair and smiled sorrowfully. “You say that every year.”
“Do I?” he asked vaguely. “And what do you answer?”
“That it’s because of the dreams. Because the candy sends them dreams of my love for them. And I can enter those dreams. In those dreams, I can live again young, free, in my true form and with all my magic, just like in the old times!”
The dragon grunted and turned his head suddenly away.
The unicorn saw a tear form in the corner of his amber eye, and tenderly kissed him on his forehead. With a single deft movement, she scooped up the tear into a tiny vial and murmured, “Someday, old friend.”

Abby Polakow is a teacher, writer, a costume designer and the co creator of a line of paper dolls and activity books under the banner of The Spindle Sisters. She has had several of her own fairy tales published and is working on a novel. If she had to become a fairy tale creature it would most likely be a unicorn. Follow her on Twitter @SpindleSisters