Love can penetrate
the dark and the cold... 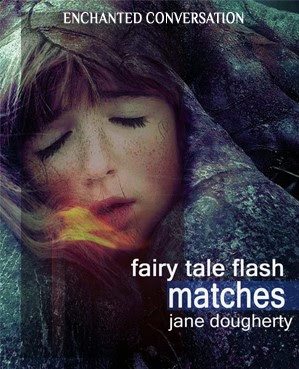 Nobody bought matches from raggedy urchins. They were too afraid of having their purses stolen. The little match girl huddled in a doorway out of the wind and wondered how she was going to go back to her stepfather with almost all of her matches unsold and barely a penny in her pocket. Snow was falling thick and fast and she was so cold she couldn’t have moved from the doorstep even if she had wanted to.

She tried to remember what warm felt like and struck a match just to watch the tiny flame burn. She struck another because it took the numbness from the tip of her finger and thumb. She struck a third before she forgot the feeling of warm. She was forgetting so much, forgetting even where she was supposed to be going. The falling snow and the cold that was like feathers made her forget and feel almost happy.

She struck another match and in the bright flame she saw a face. She saw her mother, dead when she was almost too small to remember. Almost, but not quite. She smiled and struck another match, and the face loomed closer with an expression of sadness. The little match girl struck matches one after the other, afraid to lose the face that bent over her, the eyes full of love that she remembered from long ago. One after the other, the matches died and fell into the snow, and soon there were none left. She blinked. Through the falling snow and the cold and her tears, the face full of concern was still there.

“Mama?” she asked the night and the spent flames. Arms enfolded her and lifted her from the cold step, and before she drifted into a state so close to death she could touch the cold door, she felt the warmth of a real human mother.

Mama? Her lips mouthed the word, and the woman who lived in the house beyond the cold doorstep, the woman who had lost all of her babies at birth, held her tight and nodded.

Jane Dougherty is Irish, brought up in Yorkshire and now living in South-West France. She writes stories where the magical and the apocalyptic mesh, where horror and romance meet, and the real and the imaginary cohabit on the same page. Her first YA post-apocalyptic fantasy trilogy is published by Finch Books. She has self-published three collections of short stories, and has poetry and short fiction published in anthologies, literary journals and magazines.
Check out her Amazon Author Page HERE
Blog: https://janedougherty.wordpress.com/
Website: https://wildgeesebooks.com/
Cover: Amanda Bergloff @AmandaBergloff