THE FROZEN BIRD by Nancy Holzner

The bird sang of soft golden light
warming the world. When the song
ceased, the old woman wanted to cry... 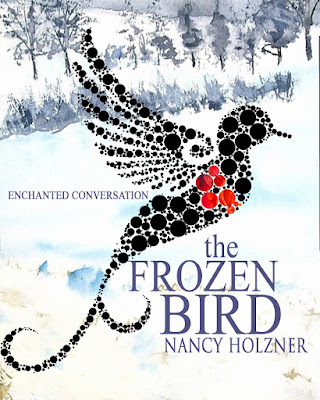 One day in winter an old woman left her hut to gather firewood. The glare of sunlight on snow hurt her eyes. Her meager shawl offered little protection against the cold that made her bones ache. At every third or fourth step, her foot broke through the crusted snow, and twice she fell and dropped her bundle of sticks.

When she fell a third time, she stayed on her hands and knees in the snow. Why get up? What difference did it make whether she froze here or in bed, shivering in her shawl and threadbare blanket? Yet she dreaded the thought that someone would find her like this, an ice-bound corpse on all fours, although she couldn’t imagine who would do the finding. It had been so long since she’d had a visitor.

The old woman rose and hugged herself, warming her hands in her armpits. She stretched her cold-kinked spine. When she could feel the blood moving in her veins, sluggish though it was, she bent to collect the scattered sticks.

That’s when she saw it. In a bush a few feet away perched a bird, its head raised as though in song. It was white as the snow, and as she approached it didn’t fly away. It didn’t move. The poor thing was frozen solid. Carefully she pried it from the branch. She cradled it in her hands and admired its perfection: feathers as delicate and precise as plumes of frost on a windowpane, eyes like icy dewdrops. A tiny icicle of tongue protruded from its beak. Perhaps, she thought, if I take it home and warm it by the stove it will sing to me. She slipped the frozen bird into her pocket.

Back in her hut, the old woman built up the fire, then settled the frozen bird near the stove. As she went about her tasks—sweeping the bare wooden floor, peeling a potato for her soup—she kept one eye on the creature. It remained unchanged: white and still, its beak slightly open as though poised to sing. What did its song sound like, she wondered.

The old woman took off her shawl and fashioned it into a nest, tucking the bird into its folds. She nudged it closer to the stove. The room grew warm; heat reddened her cheeks as she carried her bowl of soup to the table. Yet the bird remained frozen. She lifted it gently and held it on her lap. She dribbled some broth into the open beak. But the bird didn’t swallow. The soup spilled from its mouth and froze into a tiny gem that fell into the woman’s lap. She held the crystal on her palm to examine it. It was beautiful—opalescent and sparkling with internal light, until the warmth of her hand melted it back to a drop of soup.

That night in bed, the old woman tried to count how many days had passed since the first snow. Was winter always so long? She couldn’t remember. She lay conscious of the small white frozen thing by the stove. Had she made a mistake bringing that fragment of winter into her home? She decided that, should it still refuse to thaw by morning, she’d return the bird to the place where she’d found it. With that, she fell into sleep and dreamed of spring.

She awoke to a freezing room and the word No! on her lips. She got up, wrapping her blanket around her, and went to check the bird. Nothing had changed. Of course, she thought. It’s not warm enough in here. She grabbed a stick of wood to build up the fire. A splinter speared her finger. She pulled it out, and blood welled from the wound. A drop fell.

The old woman looked. Her blood had fallen into the bird’s open beak. Its red tongue flitted as notes poured from its throat. The bird sang of soft golden light warming the world, of gentle breezes and sweet-smelling flowers. When the song ceased, the old woman wanted to cry.

The frozen bird sat by the stove, its head angled upward, the red tongue the only spot of color in its body.

The old woman squeezed another drop of blood from her finger.

This time, the bird’s song held memories of first love, of lash-lowered glances and blushing cheeks, of clasped hands and furtive kisses. Tears brimmed, and when she wiped them away they froze on her cheek. She looked at her injured finger. The bleeding had ceased; the wound was sealed by a circle of ice.

That day, and in the days that followed, whenever the old woman wanted a song she cut open a finger and dripped blood into the bird’s mouth. As the beautiful songs multiplied, ice plastered each cut. When ice stiffened her hands, she cut her arms. When her arms grew rigid with cold, she cut her torso. The cuts didn’t hurt, not beyond the first flash of pain. The ice numbed her flesh even as the songs gladdened her heart.

With each cut, color and life returned to the bird. Its feathers reddened to pink and then a brilliant scarlet. Its eyes grew black and shiny. Only its beak stayed white and cold.

One morning the woman awoke to soft sunlight streaming through her window. She couldn’t feel its touch on her face, which by now was swathed in ice. She hadn’t listened to a song in days. She couldn’t afford to—the single drop of blood she had left was chambered deep in her heart. She labored to raise her stiff body from the bed. Her limbs creaked like winter trees as she stood and crossed the room. With great effort she picked up the silent bird and held it between her hands. She shouldered the door open and stepped into the sunlight.

The mild air carried scents of flowers and damp earth. The frozen woman raised her face to the sun as she pressed the bird to her chest, directly over her heart. There was pain as its beak drilled into her flesh and through her breastbone. There was emptiness as the little tongue scooped out her last drop of blood. But oh, the beautiful song that filled the woods! One tear escaped, then froze on her cheek as she stood, rapt. She could almost feel the sun’s warmth as it stroked and softened her frozen flesh.

One summer’s day a hunter found an abandoned hut deep in the woods. Its single window was shattered, its door swung from a broken hinge. He peered into the cold, dim interior and saw nothing of value inside. But it was a lovely spot, with a small, clear pond just steps from the door. The hunter drank. The water was icy cold but held a hint of salt. Above him, perched high in a tree, a scarlet bird sang and sang.

Nancy Holzner is the author of the Deadtown urban fantasy series, as well as numerous short stories. Nancy lives in Ithaca, New York, where she teaches in the Ithaca College Writing Department.